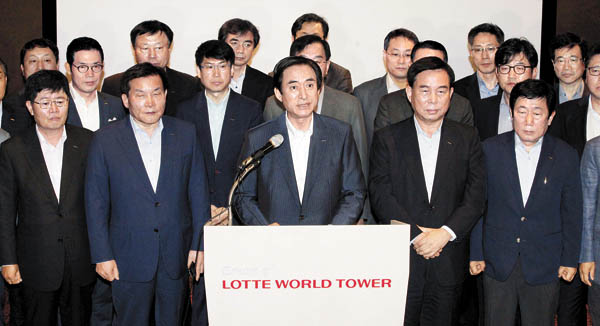 Noh Byung-yong, CEO of construction unit Lotte Corp., announces after a meeting with the heads of Lotte affiliates on Tuesday that they support the current Lotte Group Chairman Shin Dong-bin. [NEWSIS]

Heads of Lotte affiliates threw their weight on Tuesday behind Shin Dong-bin, the younger son who ousted his father as head of Lotte Holdings, after an extraordinary meeting designed to unify the group in the middle of a family battle for control.

The executives issued a statement after the meeting saying they support the younger son in the ongoing inheritance battle because the scion has excellent management skills.

“The company presidents speak with one voice that Shin Dong-bin, who has a proven track record of successful business management, is fit to lead Lotte Group,” the statement said.

Shin is technically chairman of the Lotte Group and co-CEO of Japan’s Lotte Holdings. But he is being challenged across the board by both his older brother Shin Dong-joo, his father, Lotte founder Shin Kyuk-ho, and other powerful relatives.

The executives’ group move came as the founder and the eldest son, Shin Dong-joo, intensified their attack against the younger son.

Noh read the statement at the Lotte World Mall in Jamsil, southern Seoul. When asked if the younger brother was involved in the discussion to hold the meeting, he said, “The heads reached an agreement to call this meeting.”

“We exchanged our views on the current situation and concluded that we should try our best to restore the company’s image,” Noh said.

Noh admitted that the embarrassing family battle lays bare the poor corporate governance at Lotte and shows how the owning family - usually the patriarch - has more power than he maybe should.

“[Lotte] will improve, and chairman Shin Dong-bin is aware of the issue,” he said.

Along with Korea’s Lotte Group, Lotte Holdings, a de facto holding company of Lotte’s Japanese operations, also expressed support for the younger son. The Tokyo-based holding company is at the center of the struggle, as the eldest son seeks to reinstate his father in its top post. The father was demoted by the second son last week after the patriarch attempted to fire six board members of Lotte Holdings, including the younger son and Takayuki Tsukuda, CEO of Japan’s Lotte operations.

The eldest son was ousted in January as vice chairman of Lotte Holdings.

The executive also apologized for the messy dispute.

“I am really sorry for causing such a stir,” he said.

He also shared how he felt when he heard of the founder’s decision to dismiss Dong-bin and himself.

“I didn’t hear that from the general chairman in person,” Tsukuda said. “I heard it indirectly.”

As for the health and mental condition of the 93-year-old founder, he hinted that the patriarch is not in good shape.

“I met the founder on July 27,” he said. “Overall, he remained calm, but I was bewildered as the conversation went on. He repeated the same question and mistook me for the person running the Korean business.”

As the family feud continued, Dong-bin went back to day-to-day work after returning from Japan on Monday. He visited a staff training center on Tuesday in Osan, Gyeonggi, where new employees are being shown the ropes.

The chairman delivered an upbeat message, calling the dispute “a part of the process to becoming a global company.”

The nasty battle has drawn criticism from ordinary Koreans as well as civic groups and lawmakers. A consumer rights advocacy group said Tuesday that it will launch a boycott campaign of Lotte’s products and services.

Sales at Lotte retail shops indicated that the public was staying away out of distaste for its governing family.