7 die from heatstroke in stark rise from last year

7 die from heatstroke in stark rise from last year 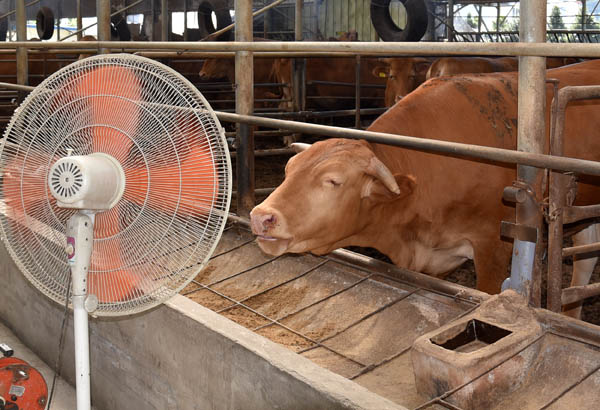 A cow keeps cool in front of a fan by its pen in Ulju County, Ulsan. The city was under a heat wave warning on Tuesday. [NEWSIS]

A government report released Tuesday linked seven deaths in Korea this summer to heatstroke, a stark rise from the single case reported last year, as temperatures across the country continue to soar.

In the latest report, which tracked patients who suffered from heat-related illnesses at 536 medical institutions nationwide, 616 people were found to have been affected since May 24. About half - or 307 people - was reported last week, more than seven times that from the week before, when only 42 were counted.

Of the 307 cases last week, 45 came from South Gyeongsang and 38 from South Jeolla.

Among the seven fatalities, six were elderly farmers working outdoors in temperatures exceeding 30 degrees Celsius (86 degrees Fahrenheit). Three deaths occurred Saturday, and the casualties, all female and ranging in age from 82 to 89, were all found dead in their fields.

On Monday in Incheon, a 23-year-old conscripted policeman reportedly died from heatstroke after playing soccer at a local park when the temperature was 30.3 degrees Celsius.

The officer reportedly played in the first half but opted to sit out during the second-half, saying he did not feel well. He collapsed soon after and was immediately transported to a nearby hospital, but died about an hour and a half later, police said.

Local fire authorities said the three were close friends and attended a middle school in Bucheon, Gyeonggi. The teens were reportedly vacationing at a summer home that belonged to one of their grandfathers.

On Tuesday, heat wave warnings were also issued in areas in the country’s southern reaches, including Ulsan and Busan, where temperatures surpassed 35 degrees Celsius for the second consecutive day.

The weather authority predicted that through Monday, most of the country will be affected by sweltering nighttime temperatures above 25 degrees. The rest of the week will be mostly cloudy, with rain expected in Seoul and Gyeonggi on Wednesday.