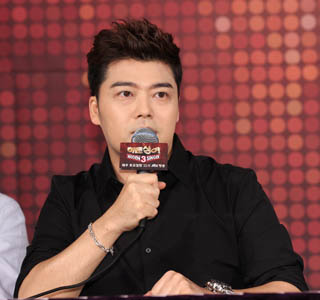 Entertainer Jun Hyun-moo has been offered to host various programs on KBS, where the 37-year-old worked as an anchor from 2006 until 2012 when he left the company.

Jun is coming back to KBS after three years, since the company has ruled that anchors who resign can’t appear in its programs for three years.

Even though Jun has not yet decided on which program to take part in, he is expected to return to the broadcasting company in the fall.

“Jun is currently deliberating on which program he thinks he will be able to do well in,” said the host’s spokesperson on Wednesday. “He doesn’t have a lot of time [as he is currently hosting various reality programs], so it is likely that Jun will join a single show.”

Jun left KBS in September 2012 and has been participating in reality shows on a number of different channels, including JTBC’s “Non-Summit,” MBC’s “I Live Alone” and Olive TV’s “Make an Order.”

His talent in hosting variety programs is widely acknowledged, as he has clinched several awards, including the 51st Baeksang Arts Award for Best Male Variety Performer in 2015 and the MBC Entertainment Awards for Excellence in a Variety Show in 2014.