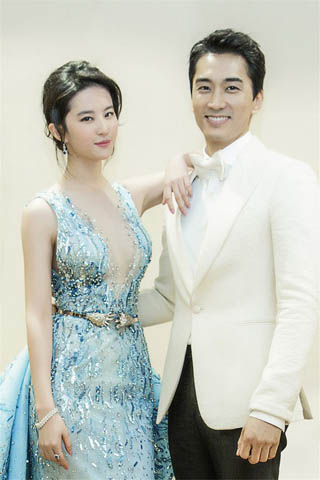 Korean Wave actor Song Seung-heon, 38, and Chinese-American actress Liu Yifei, 27, have been confirmed to be dating.

“They just started seeing each other and are currently at the stage of getting to know each other,” Song’s talent agency, Better Ent, told Yonhap News on Wednesday.

The two stars have gotten to know each other after working on the Chinese film “The Third Way of Love” together last year.

“They weren’t dating when working on the project,” the entertainment company said. “However, they naturally grew close after the shooting was completed.”

Suspicion about the two TV personalities’ relationship first arose when a Chinese media outlet reported that “Liu and Song were riding in the same car, and the two headed to the actress’ vacation home.”

Liu, who may not be well-known to Koreans, is a renowned actress in China. After debuting in 2003 through the television program “The Story of a Noble Family,” she has starred in various films, including “For Love or Money” (2014), “Outcast” (2014) and “The Assassins” (2012). Based on her popularity in China, she also appeared in the Hollywood movie “The Forbidden Kingdom” (2008).