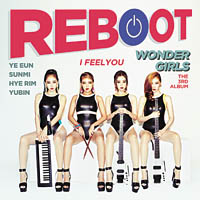 The Wonder Girls have made a comeback after three years with members Yeeun, Yubin, Hyerim and Sunmi - who wasn’t in the group since 2010. After Sunye got married in 2013, moved to Canada and became a mother, it was evident that she would not be coming back to the Wonder Girls. Not only has the membership changed, the group can no longer be called just a girl or idol group. Rather, each member skillfully plays musical instruments - Yubin on drums, Yeeun on piano, Hyerim on guitar and Sunmi on bass. The girls play songs they wrote, together with professional composers, for all songs on the 12-track album, excluding the title track, “I Feel You,” which was written by Park Jin-young, the group’s producer.

More than the title song, listeners may be drawn to songs like “Candle” and “OPPA,” written by Hyerim, as well as “Loved,” written by Yubin and “This Moment” written by Yeeun, for they all sound very new and fresh.

“Back,” full of rapping by Yubin and Hyerim, will be especially appealing to those fans waiting to hear about the group’s three-year hiatus.