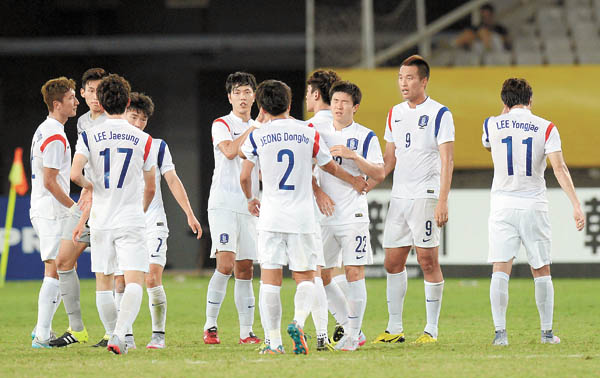 South Korea men’s national team players leave the stadium after a 1-1 draw against Japan in the EAFF East Asian Cup on Wednesday in Wuhan, China. The men’s team will face North Korea on Sunday. The team currently has one win and one draw in the tournament. [NEWSIS]

The men’s and women’s national football teams need to beat North Korea to win the EAFF East Asian Cup, and tensions are high in Wuhan, China.

The men’s team, led by coach Uli Stielike, will face North Korea at 6:10 p.m. on Sunday for its final match in the tournament. The South is currently the leader among the four nations after beating China 2-0 and drawing 1-1 with Japan.

North Korea is third with a 2-1 victory against Japan and 2-0 loss against China.

The South can clinch its third EAFF East Asian Cup title - its first since 2008 - if it beats the North. If the two Koreas stalemate, the championship will depend on the result of a match between China and Japan.

If the women’s team beats the North on Saturday and the men’s team does the same a day later, it will be the first time in EAFF East Asian Cup history that one country has swept both the men’s and women’s titles.

While the women’s team have just one victory and one draw in their last 15 encounters with the North, the men’s team has been in the opposite position. Its record stands at six wins, seven draws and one loss against the North and hasn’t lost since 1990, when it suffered a 2-1 defeat in Pyongyang.

Although the numbers suggest the South has been dominating the North, the latest matches have been close calls. In the six matches played since 2000, the South had five draws against the North and only one win.

Since the North, ranked 124th in the FIFA rankings, can also win the title by beating the 54th-ranked South, the match is likely to be fierce. This will be the first time since April 2009 that the teams have played against each other at the senior level.

“The match against North Korea will be like a final,” Stielike said. “Our team’s style and mentality is praiseworthy. Since we can take a rest for a while, we will prepare thoroughly.”

For the match against Japan on Wednesday, Stielike changed eight players from the starting lineup featured in the match against China. Only goalkeeper Kim Seung-gyu, defender Kim Young-gwon and defensive midfielder Jang Hyun-soo started in both games.

At Thursday’s team training, Stielike rested 11 players who started against Japan, as well as defender Hong Chul, who injured his right ankle. But the 60-year-old coach continued training with rest of the players.

Meanwhile, North Korean coach Kim Chang-bok told local reporters that attacking midfielder Kim Seung-dae is the South Korean player he’s most worried about. The 24-year-old from the Pohang Steelers scored a goal against China on Sunday but didn’t play against Japan.

“In the match between South Korea and China, the player with the No. 12 jersey [Kim Seung-dae] was impressive,” said the North coach Kim. “Since he is likely to play against us, we will prepare a tight defense.”

In the Asian Games final, where the under-23 national team played, South Korea beat North Korea 1-0 and took the gold medal. North coach Kim was also leading the team then.

“We were focused on defense, but now we’re pressuring the opponent from the front,” Kim said. “We now play a much more aggressive kind of football.