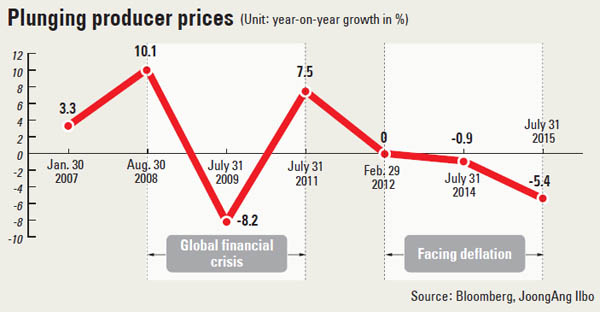 China is facing deflation, with its producer price falling 5.4 percent at the end of last month from a year earlier. Market experts are already projecting that it could drop further, to 4.8 percent by the end of this year.

The slip is raising concerns about the spillover it might have on the Korean economy, which depends heavily on exporting to the world’s largest market.

According to the Chinese Bureau of Statistics, inflation this month saw its sharpest drop in nearly six years, since October 2009.

The producer price index has a close connection with the net profits of Chinese companies; when the PPI drops, so does net profit.

The recent slump in producer prices is believed to be the result of an oversupply of goods amid shrinking local demand.

The recent trend is seen by market experts as a glimpse into the structural problems in China’s economy of excessive and overlapping investment.

But the problem isn’t new. The PPI has been falling since February 2010 for 41 consecutive months.

The falling PPI is also affecting China’s consumer price index. In July, the CPI grew 1.6 percent year-on-year. In the last 11 consecutive months, China’s CPI has been stuck at a 1 percent growth rate.

Even last month’s CPI could have seen slower growth if it weren’t for the hike in pork prices due to concerns over the meat supply.

Such uncertainty is bad news for Korean exporters, since China is Korea’s biggest customer.

Goods and services that are exported to China account for 25.4 percent of all exports made in Korea.

This figure is nearly twice the size of exports made to United States, at 12.3 percent.