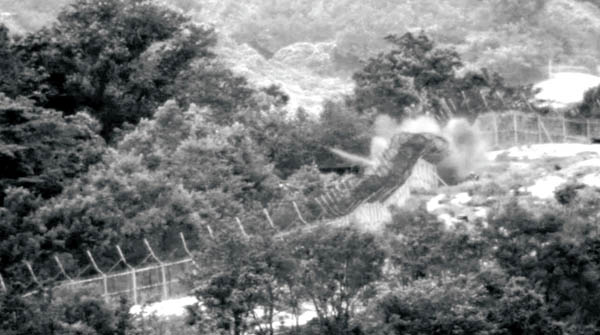 Earth dust rises as land mines planted by the North Korean army exploded last Tuesday south of the Military Demarcation Line near the city of Paju, Gyeonggi, maiming two patrol soldiers. The explosion was recorded by the surveillance equipment Thermal Observation Device, which was disclosed by the military on Monday. Provided by the Joint Chiefs of Staff

South Korea’s military has determined North Korea was behind the detonations of three land mines that maimed two soldiers on patrol in a highly fortified border area last week, sending tensions on the peninsula soaring.

The conclusion of a joint probe by officials from the Ministry of National Defense and the UN Command was announced Monday. They said that three land mines exploded in succession on Aug. 4 in the western demilitarized zone near Paju, Gyeonggi, triggered by the movements of the South Korean soldiers.

One soldier lost both of his legs and another lost a foot.

“The incident is confirmed to have been perpetrated by the North Korean army, which had illegally crossed the military demarcation line and planted land mines in wooden boxes with a clear intention to inflict damage [on the South Korean military],” said Maj. Gen. Koo Hong-mo, director of operations of the South’s Joint Chiefs of Staff on Monday.

“This act of provocation is not only in breach of the armistice and a mutual pact on non-aggression, but also not the act of a normally-functioning military.”

The South Korean military vowed a “searing response” to the blasts but declined to elaborate. 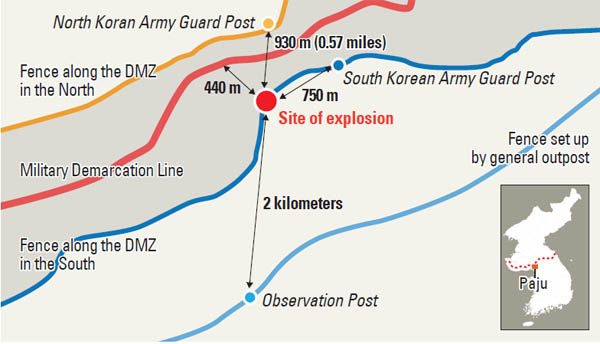 However, apparently as part of countermeasures, the South Korean military decided Monday to resume psychological warfare through propaganda broadcasts via speakers installed at frontline units. That propaganda campaign has been suspended since 2004, when the two Koreas were on better terms.

“Starting from 5 p.m. [Monday], we will air the broadcast every day. The content will mostly be inexcusable injustices on the part of the North in the land mine operation as well as the [advanced] status of South Korea as a nation,” Kim Min-seok, Defense Ministry spokesman, told the Korea JoongAng Daily.

“There was no one in the military who opposed the measure,” added Kim, who said the broadcasts will be made for several hours at any given time every day.

Resuming a propaganda operation suspended for over a decade must have needed approval by the Blue House, so speculation has arisen that President Park Geun-hye is determined to sternly deal with the blasts. 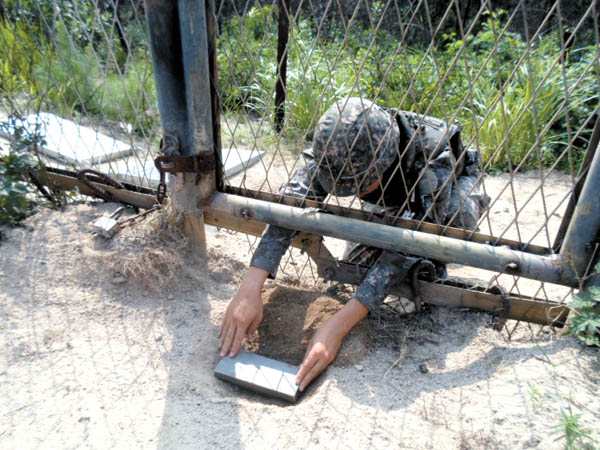 The Defense Ministry said Monday that two of the three land mines planted by the North exploded around 7:35 a.m. last Tuesday, when a soldier with the rank of staff sergeant, identified by the surname Ha, stepped on them after he opened the gate of a fence leading toward the demarcation line on a normal patrol route.

As Ha, 21, was badly injured in the blast, another staff sergeant surnamed Kim, 23, tried carrying him to safety with two other soldiers, the military said.

After they passed through the same gate of the fence, the third land mine was triggered at 7:40 a.m., injuring Kim.

In the hospital later, surgeons amputated both of Ha’s legs, while Kim had his right foot removed at the ankle.

“From the site of the explosion, the military retrieved 43 fragments,” said Army Brig. Gen. Ahn Young-ho, who led the joint investigation.“After analyzing them, we have come to a conclusion that they were the North Korean army’s wooden-box land mines.”

Asked whether the mines could have floated south during heavy rain, the general said the slope of the landscape in the concerned area is higher in the northern part, and the mines would have had to float uphill.

“Also, if the mines drifted near the fence [instead of being intentionally planted], our patrol guard would have spotted it when he unlocked the gate, which required him to bend very low,” Ahn said.

The site of the explosions was 440 meters (0.27 miles) south of the military demarcation line bisecting the two Koreas.

The closest friendly military general post in the 2-kilometer buffer zone at the demilitarized zone was 750 meters to the east.

North Korea’s general post is 930 meters north of the site, meaning that North Korean soldiers may have taken a 930-meter route toward the South, passing the demarcation line, to lay the mines. 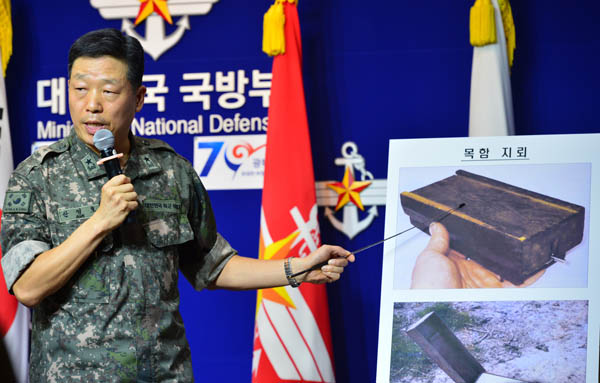 Army Brig. Gen. Ahn Young-ho, who led a joint investigation into the land mine blasts last Tuesday, points at the photo of a land mine in a wooden box, the same kind the military said was planted south of the military border by North Korea, during a briefing at the Ministry of National Defense on Monday.[NEWSIS]

The military could be questioned over its failure to detect such an infiltration by North Korea into the Southern area to lay the mines. Gen. Ahn said the area presents challenges for surveillance because of a dense forest and poor weather, including heavy rain and fog.

Despite its name, the demilitarized zone - comprised of two buffer zones roughly 2 kilometers wide on each side of the border - is one of the most heavily militarized borders on the planet, and each side’s actions are heavily monitored.

The South Korean military believes the mines were planted sometime between July 23 and Aug. 3, a day before the blasts, since South Korean soldiers “had patrolled the area of the same route taken on Aug. 4 on July 22.”

The U.S.-led UN Command that oversees the terms of the Korean War Armistice Agreement agreed with the Defense Ministry that the mines were planted by the North Korean army in violation of the armistice.

It ruled out the possibility that the three mines might have been old ones that drifted to the South over years through heavy rain or soil shifting, saying they were recently laid.

The UN Command also said it plans to propose a general officer-level dialogue with the North Korean Army over the transgression, but without elaborating when.

North Korea had not yet responded to the accusations as of press time Monday.

It is possible that it could deny planting the mines, given its years of denying the sinking of the Cheonan warship in 2010, which the South Korean military said was torpedoed by the North, killing 46 sailors inside.

A video clip of the mines exploding is expected to further worsen anti-North sentiment among South Koreans and lessen the chance of improving thawed ties soon.