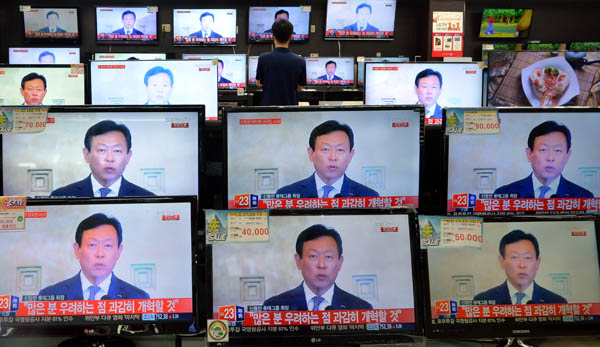 Lotte Group announced it would try to improve its governance structure after the fraternal battle over management control shed light on its byzantine cross-shareholdings centered in Japan.

Shin Dong-bin, chairman of Lotte Group and co-CEO of Lotte Holdings, announced that Lotte will reduce the shares held by Japan-based holding companies in Hotel Lotte, a de facto holding company of Lotte’s operations in Korea, and plan an IPO of the hotel unit.

“The size of the stakes held by Japanese subsidiaries in Hotel Lotte will be reduced,” Shin said Tuesday at Lotte Hotel Seoul in Sogong-dong, central Seoul, after he apologized for the ongoing family feud over management succession.

The press briefing came after Lotte became the target of outrage from the public and boycott campaigns by various groups including civic groups, consumer rights groups and an association of small merchants.

Hotel Lotte is an unlisted hospitality operator at the top of cross-shareholdings of Korea’s Lotte affiliates, holding a sizable amount of shares in Lotte Aluminum, Lotte Confectionery, Lotte Shopping and Lotte Construction & Engineering. Despite the stakes it holds, reliable information about the company is hard to come by since it is not listed.

While reducing the stakes held by Japan-based companies, Lotte will move to list Hotel Lotte on Korea’s stock market in a bid to enhance transparency. “To diversify the composition of shareholders, [Lotte Group] will take [Hotel Lotte] public,” the chairman said.

When asked for a specific timeline, Shin answered, “We’ve discussed the issue [of an IPO] from last year. But here, the position of board directors [at Hotel Lotte] should be taken into account. So, it’s hard for me to say when it will be.

“But I will make efforts to make it happen sooner or later.”

Other key reforms include adopting a holding company to manage the sprawling businesses of Korea’s Lotte Group with 80 subsidiaries, a sweeping change that will cost around 7 trillion won ($5.9 billion), according to the group.

“[Lotte] will cut the remaining cross-shareholding links by 80 percent by the end of this year. In the long run, we will eliminate the circular shareholding by introducing a holding company.”

But some worry that embracing a holding company structure isn’t necessarily a panacea, since it too has drawbacks.

Since those transactions are not typically shown in consolidated accounts, transparency in contracts as well as business orders can be compromised.

Shin went on to say that the company will form a task force to improve its general corporate governance.

The shareholder meeting is expected to become a proxy battleground between Shin Dong-bin and Shin Dong-joo, the eldest son of founder Shin Kyuk-ho, who tried to remove his younger brother from control of Lotte Holdings.

Lotte Group said that shareholders will discuss the appointment of outside directors and ways to improve corporate governance.

Dong-joo has said he will put forward a motion to bring his father back to the border at Lotte Holdings, although the group said Tuesday there is no such motion on the table.

Despite Lotte’s efforts to diffuse the controversy, activist groups continued to denounce the company.

A nationalistic group called Grand Alliance of Patriotic People condemned the conglomerate for its links with Japan and poor corporate governance in front of Lotte Department Store in Sogong-dong, central Seoul.

To ease such hostile sentiment, Chairman Shin emphasized that the Lotte Group is a Korean company.