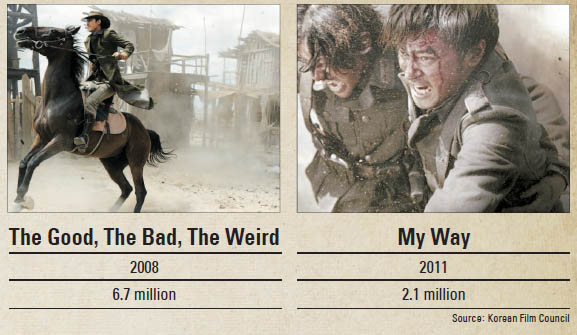 Critics say the depressing mood and sense of defeat pervasive in the era scare away cinemagoers, who are looking for entertainment at the theaters.

Of course, there are always exceptions.

In theaters now is Choi Dong-hoon’s latest historical action flick, “Assassination,” set in 1933, which has been seen by more than nine million moviegoers as of Wednesday.

Generating buzz for its nice portrayal of major historical facts and Choi’s signature fast-paced editing, the highly entertaining “Assassination” is on the verge of hitting the monumental 10 million mark, easily surpassing its break-even point of seven million admissions.

By depicting a stumbling yet glorious assassination scheme carried out by Korean independence fighters, the film is also said to be resonating in the current atmosphere in Korea where a sour sentiment toward its neighbor to the east still remains.

But in most other past cases, the jinx holds true.

“People don’t want to remember the era where Korea was under Japanese control,” explains culture critic Ha Jae-keun. “Those who go to theaters to find something entertaining aren’t interested in films set in this gloomy era.”

This also explains why films set in the final years of the Joseon Dynasty (1392-1910) have also failed to win the hearts of the public.

Meanwhile, Kim Jee-woon’s “The Good, The Bad, The Weird” achieved an unusual level success. This is likely because the film was made in an entertaining way, and there was no mention of Japanese colonization .

“Events happening in that film could be cut out and placed into any time of the history and it would still work,” said film critic Hwang Young-mee.

Sometimes, the sullen sentiment towards the Japanese government surfaces in the public’s reaction to films set in the era. In “Blue Shallow” (2005), the late actress Jang Jin-young played Park Kyung-won, the first Korean female pilot, who had attended a Japanese flying school.

However, once the film began to be perceived as pro-Japanese, it led to the launch of an online petition against seeing movie. The film’s box office sales topped out at 543,597 admissions.

“The film itself was pretty well-made, but the social sentiment didn’t support it,” said Hwang.

However, Hwang believes the era should continue to be “excavated.”

“The Japanese colonial era contains an indefinite source of stories, because Korea was going through uneven development, having both sophisticated culture brought in by intellectuals who studied abroad while also having an underdeveloped side with many people still suffering from exploitation,” she said.

“Just as the Chinese keep making films about the frustration and sense of loss they felt when they lost the Second Sino-Japanese War, we should think about how to revive past events to find valuable meaning and relevance to present-day audiences.”