Stamps from North are hot, and this man owns them all

Stamps from North are hot, and this man owns them all 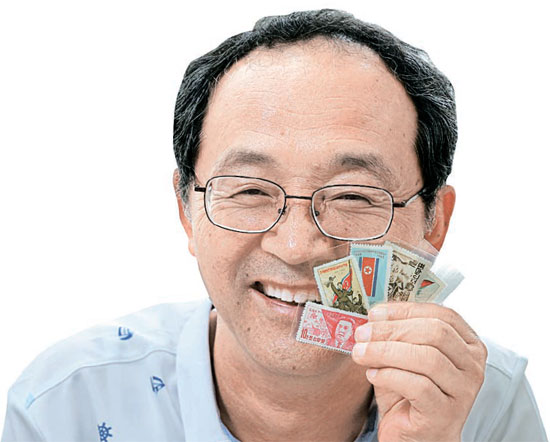 Shin Dong-hyun, 56, head of a regional branch of the Korea Land and Geospatial Informatix Corporation, shows off part of his postage stamp collection last week at the Seoul Museum of Art. He has collected nearly every North Korean stamp, including the first one ever issued. By Shin In-seop

Since last month, the Seoul Museum of Art (SeMA) has been hosting an exhibition of 249 postage stamps from North Korea to commemorate the 70th anniversary of Korea’s liberation from Japan.

One stamp, obviously issued by South Korea, read “Democratic People’s Republic of Korea,” an official name of the North. During the 1950-53 Korean War, the North used South Korean postage stamps, unable to supply its own.

A stamp depicting Dokdo, a small islet that is the subject of a territory dispute between South Korea and Japan, bears the title, “Dokdo, an island of Joseon.” And two former South Korean presidents, Kim Dae-jung and Roh Moo-hyun, who held summits with former North Korean leader Kim Jong-il, can also be seen on stamps commemorating the meetings.

All of these stamps are owned by one person, Shin Dong-hyun, head of a regional branch of the Korea Land and Geospatial Informatix Corporation. The 56-year-old possesses nearly every North Korean postage stamp issued from 1946 to 2014, estimated to number about 6,500. 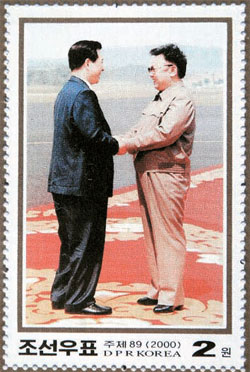 When the reporter met Shin last week at SeMA, the man brought a thick postage stamp album, which contains images, identification numbers and reasons for issue. He has 17 more albums for his collection.

“I started collecting them after seeing a [North Korean] Dokdo stamp three years ago,” Shin said. “In terms of variety and quantity, I believe this is the best [North Korean] stamp collection in the world as it contains the unissued ones.”

North Korea is a renowned postage stamp manufacturer. The regime uses stamps not only to promote its political ideology among citizens, but also to bring in money from outside the country. The country produces series of stamps on themes such as Princess Diana.

North Korean stamps a huge popular among collectors abroad, since they are seen as a way of looking inside the isolated country.

“I’ve spent tens of millions of won for my collections,” Shin said. “My family gave up talking about it anymore.”

He purchased the stamps from dealers and auctions in other countries like China. Recently, he bought a North Korean stamp commemorating the eighth anniversary of liberation from Japan, issued in 1953, on eBay. But the purchase raised suspicions at South Korea’s spy agency. During shipping, the stamp was found by customs, and the National Intelligence Service visited Shin to look into his background.

“Collecting stamps is not illegal, and since I was never suspected for my ideology, the case was closed,” he said.

North Korean stamps are getting even more popular these days.

Shin said he sometimes sells stamps he already owns, at prices two to three times higher than what he paid.

“If North Korea collapses, the prices will go up,” Shin explained.

“I want to collect all 6,500 stamps at first. After unification, they could be used to show how North Korea was [before unification].”

Originally, Shin collected coins and bills from around the world starting from age six, and he has gathered about 20,000 coins and bills, including about 100 from North Korea.

Shin said he wants to build a coin museum someday. As for stamps, Shin said he intends to donate his collection to a museum once he finds a suitable institution.