‘We are divided too long’

‘We are divided too long’ 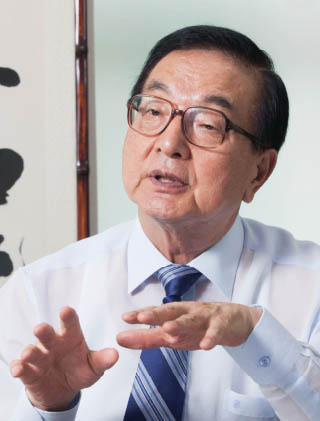 In an interview with the Korea JoongAng Daily in his office on Aug. 3, Chung Chong-wook, chairman of the Committee for the 70th Anniversary for Liberation, struck a highly optimistic note on what could bring South and North Korea closer to unification.

Chung, who also serves as the vice chairman of a special unification preparatory committee, said the economic strength and skills of South Korea would eventually be “complementary” with the cheap labor and rich natural resources of the North, providing abundant opportunities for economic growth even before there is “one Korean state.”

“A process toward unification through inter-Korean exchange could be a solution to many problems facing South Korea [mired in low economic growth],” said the 75-year-old former professor of international relations. “South Koreans could make the best out of economic opportunities that would be available.

“Look at the level of labor quality in the North,” said Chung. “South Korea will face serious obstacles to growth by 2030 due to its low birth rate. To resolve a myriad of problems facing South Korea now, a solution to all these troubles could come from unification.”

Chung has in-depth knowledge of North Korea from his academic career in international politics and public service. Having lived through the first nuclear crisis provoked by Pyongyang in 1993 as a presidential chief secretary for foreign affairs and security in the Kim Young-sam government, Chung also later served as Ambassador to China in the late 1990s.

Chung said he believes North Korean leader Kim Jong-un is having “no problems at all” running his country.

“Every leadership has its own unique style,” he said. “In that, Kim Jong-un differs from his father Kim Jong-il. Jong-un’s two-track objective to achieve both nuclear armaments and economic development significantly differs from the military-first policy of his father.”

He admitted there was a lot of skepticism over whether the impoverished North could pull off the two objectives at the same time. But he said it was important to note that the North Korean leadership had begun focusing on economic growth and raising living standards with a shift in its national priorities.

When asked why Pyongyang had rejected Seoul’s repeated calls to return to negotiations, Chung said there was a deep sense of mistrust.

“North Koreans have this mistrust in South Koreans that we want unification by absorption. Such a fear is exacerbated by their isolation from the international community. But as the Kim Jong-un regime now has ruled the country for four years, the time has come for him to choose a different path. And we must stand by to help them choose the right path.”

On the special preparatory committee for which he serves as vice chairman, Chung said it was created because of President Park Geun-hye’s keen interest in the unification issue, which he says dates back to the years in the Blue House with her father Park Chung Hee.

“President Park has experience as a substitute first lady when she was in her 20s, a special experience that involved her in state affairs,” he said.

Chung, who earned a Ph.D in political science from Yale University, said by witnessing the ups and downs of inter-Korean relations, Park seemed to have realized that unification would be the only way to put an end to the vicious cycle of inter-Korean rivalry.