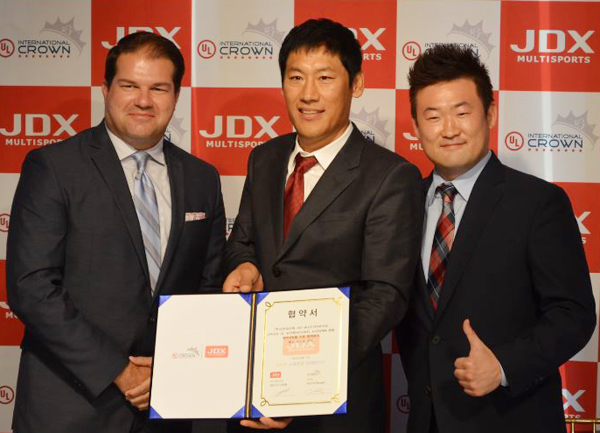 Korean companies of all sizes are expanding their global golf presence by signing sponsorship deals.

According to the company, it will launch its UL International Crown-JDX collaboration clothing lines beginning with the next spring-summer collection.

“We are thrilled to welcome JDX Multisports to the family of LPGA UL International Crown partners,” said Sean Pyun, managing director of international business affairs at the LPGA, in a release.

“We look forward to seeing the UL International Crown-JDX collaboration products in their 200 stores beginning in 2016.”

Golfers will wear JDX Multisports-designed uniforms throughout the event and the company is hoping that the deal will enhance its brand recognition across the world.

“JDX Multisports has always been focused on being one of the best global brands, and there is no better event that symbolizes global competition than the UL International Crown,” company CEO Kim Han-chul said in a release.

“This partnership will be a great way to promote our high-quality products and unique design worldwide, as our apparel is showcased by all eight teams during the 2018 UL International Crown in Korea.”

Last year, the LPGA decided to held the 2018 UL International Crown in Korea, which is the first time that the golf event will be hosted outside the United States.

The UL International Crown is a biennial event founded last year. It is a team match play competition that features 32 female golfers from the top eight countries.

In the inaugural event in 2014, Spain was the champion. Korea, composed of Park In-bee, Ryu So-yeon, Choi Na-yeon and Kim In-kyung, finished third. The second edition is scheduled to be held at Rich Harvest Farms in Sugar Grove, Illinois.

JDX Multisport, which was founded in 1985, is one of the fastest growing fashion brands in golf by sponsoring golfers. Its golfers include Hall of Fame golfer Pak Se-ri and 2012 Kraft Nabisco Championship winner Yoo Sun-young. In Korea, it has been running the JDX pro golf team that comprises seven pro golfers, as well as sponsoring the military golf team.

Meanwhile, Korean conglomerates have already listed their names as official local partners for the Presidents Cup this year. The event - featuring golfers from America and elsewhere around the world, excluding Europe - will be hosted at the Jack Nicklaus Golf Club in Incheon from Oct. 6 to 11.

Kumho Asiana Group, which has the nation’s second largest flag carrier, Asiana Airlines, will provide air tickets to officials, while Hyundai Motor said 67 of its vehicles will be used during the event to transport players and officials.

Ryu Jin, chairman of the Poongsan Group, is the head of the organizing committee, while Kumho Asiana Group Chairman Park Sam-koo and Posco Chairman Kwon Oh-joon are also members.