Pardoned SK Group chairman gets back in office

Pardoned SK Group chairman gets back in office 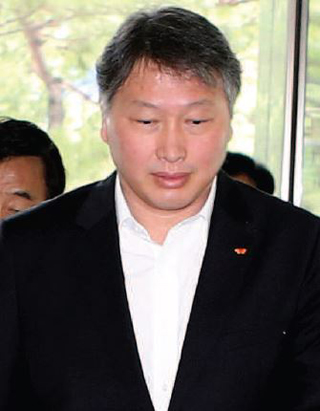 SK Chairman Chey Tae-won went to his office at the group’s headquarters in central Seoul on Saturday and Sunday after being released from jail Friday morning in a special pardon.

After nearly three years behind bars, leaving the conglomerate without a formal leader, Chey was ready to get back to business.

He was the only one among convicted chaebol heads to receive a presidential pardon ahead of the 70th anniversary of Korea’s’ liberation from Japanese colonial rule. President Park Geun-hye had said he and other beneficiaries are expected to help the economy and lift the national mood ahead of the big anniversary.

“We expected Chairman Chey would be staying home to take care of his health for at least a few days after getting out of jail,” said an SK spokesman. “But it seems like he feels grave responsibility for being the sole beneficiary of the pardon [among businessmen.]”

He is expected to accept reports from the heads of SK affiliates about overall management this week.

Stepping out of the prison in Uijeongbu, Gyeonggi, with a Bible in hand early Friday morning, he vowed in front of nearly 100 reporters to do his best to contribute to revitalizing the Korean economy.

“Given the vacuum was lengthy, I haven’t exactly figured out the situation,” he told reporters. “I will come up with detailed plans [to resuscitate the economy] after thoroughly understanding the circumstances.”

Chey, who took over the chairmanship from his father and SK founder Chey Jong-hyun in 1998, was sentenced to a four-year prison term for embezzlement and corporate malpractice in January 2013. This is his second pardon, as he has been convicted three times for financial crimes.

His brother Chey Jae-won, senior vice chairman of SK Group, was not pardoned. He has been jailed for two years and four months after receiving a three-and-a-half-year prison sentence for similar crimes. Hanwha Group Chairman Kim Seung-youn and LIG Group Chairman Koo Cha-won were also omitted from the list.