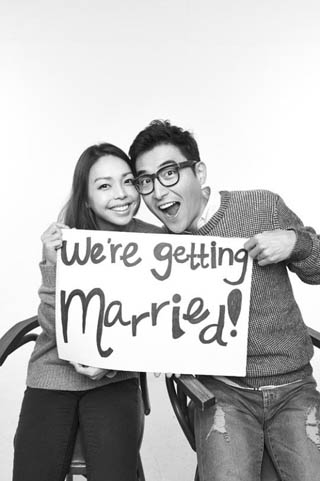 TV personality Angela Park, who married comedian Kim In-seok early this year, has been reported to be three months pregnant, according to Kim’s talent agency, Koen Stars, on Monday.

Park and Kim are currently known to be focusing on parental care for their baby scheduled to be delivered next March.

“Since Park is in the early phase of her pregnancy, the couple is putting forth their best effort to maintain the health of both Park and the upcoming baby,” Koen Stars said.

In addition to the good news, Kim also revealed that his wife hurt her leg and therefore has metal pins inserted, so the pregnancy was a huge surprise for them both, as Park is scheduled to undergo surgery this month.

The two got to know each other through friends last year and apparently fell for each other at first sight. They soon developed a relationship, which eventually led to their marriage in November.

The 28-year-old Park has worked as a broadcaster for several media companies, including Arirang TV and EBS. The 35-year-old Kim is currently on tvN’s comedy program “Comedy Big League.”