LG doubles down on OLED tech

LG doubles down on OLED tech 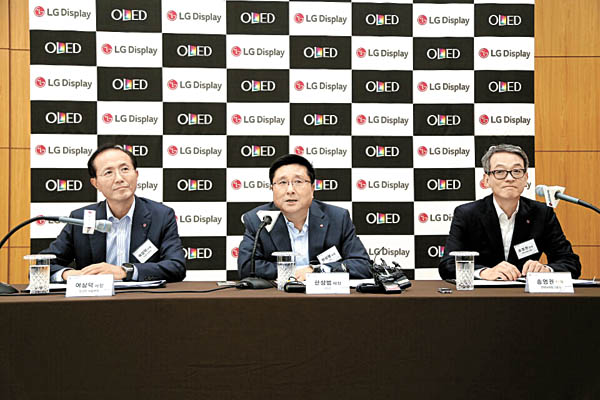 Han Sang-beom, CEO of LG Display, center, speaks to the press at the company’s LCD production plant in Paju, Gyeonggi on Monday. This year the company celebrates 20 years of LCD manufacturing. Provided by the company

PAJU, Gyeonggi - LG Display, the world’s top LCD producer, announced on Monday it would invest 10 trillion won ($8.4 billion) by 2018 to shift its business focus from the traditional LCD to the more futuristic OLED (organic light-emitting diode).

The investment would be “mainly used to expand the production of large-size and flexible OLED panels and pioneer new markets for OLED, such as commercial displays,” Han Sang-beom, CEO of LG Display, said in a press conference at the company’s factory northwest of Seoul.

The one and only supplier of Apple Watch’s AMOLED (Active Matrix OLED) panels is poised to secure leadership in the fledgling wearable display market with flexible OLED, and in the automotive and foldable display market.

The company also vowed to strengthen the performance of premium large-size Ultra HD LCD TVs and mobile products. That means the producer is set to take a two-track strategy to sustain growth.

LG’s investment plan, which has designated OLED a “game changer” in the industry, came as the display unit of LG Group - the nation’s fourth-largest conglomerate - celebrated the 20th anniversary of its first LCD shipment. The company said the spending is expected to contribute to creating 130,000 new jobs, and the value of the ripple effect from it would amount to 35.5 trillion won.

OLED has an edge over LCD in terms of picture quality and design flexibility and is considered the solution to producing transparent and flexible displays with no limits in design, LG says.

“The OLED market has an infinite potential. We have a big picture for at least the next two decades,” he said. “The glass wall right next to you and the pieces of paper in front of you will eventually become displays.”

Archival Samsung Electronics made a surprise announcement earlier this year that it would “indefinitely” postpone developing OLED TVs, effectively giving up on the market segment, citing obscure market prospects.

Samsung’s decision has inevitably placed LG in a dominant position to spearhead the large OLED panel market. The company began mass producing a 55-inch OLED TV in 2013 - for the first time in the world - and its market share in the global OLED TV market was 98.7 percent in August, according to market researcher DisplaySearch.

When asked whether the large-size OLED panel market will be profitable and promising enough, Han cited the example of U.S. electric vehicle producer Tesla Motors.

“If you look at Tesla, it entered into the market in 2010 [and the success came much later],” he said. “For a product to succeed, it takes a sizable incubation period, and the same is true for large OLED panels.”

Low production capacity has been cited by analysts as the major weakness of OLED. But the prospects for the market are bright, industry data shows. According to DisplaySearch, the OLED market is expected to expand more than three-fold, from $8.3 billion in 2014 to $28.3 billion by 2022.

Han added that when the second factory reaches its full capacity later this year, the fundamentals for profitability will be established.

LG outpaced rival Samsung to become the No. 1 LCD producer. As of the second quarter, LG accounted for 23.3 percent of the world LCD market as the top player, trailed by Samsung at 18.7 percent and China’s Innolux at 18.6 percent.