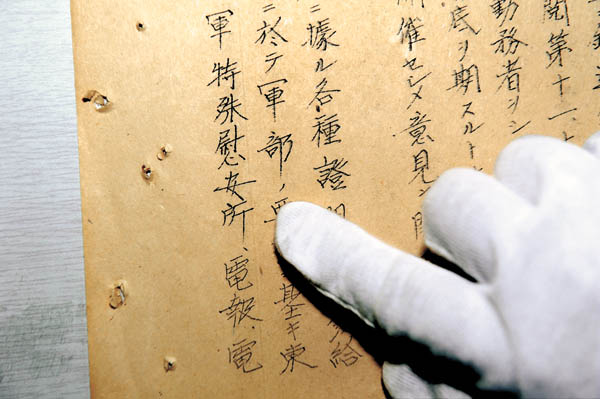 Files detailing women being forced to serve as comfort women for Japanese forces during World War II are shown at the provincial archives in northeast China’s Heilongjiang province. [XINHUA/NEWSIS]

Chinese authorities have revealed new documents that show the Japanese army coerced a group of some 2,000 Korean women in the 1940s to serve as sex slaves during World War II.

China’s State Archives Administration this week released a new collection of documents on the “Imperial Japanese Army’s sex slaves,” euphemistically referred to as comfort women, sharing new evidence through never-before-seen military reports and letters. On Monday, they included a Japanese government document from a record office in Heilongjiang province in northeast China. Chinese media said the Japanese document detailed the drafting of Koreans to work at comfort stations in several regions throughout northeastern China in 1941. The record from the Japanese puppet state of Manchukuo described that “in October 1941, the Japanese army opened a military comfort station in locations such as Mudanjiang and Suifenhe [in Heilongjiang], where they brought dozens of Korean women and forced them to work as sex slaves.”

Of the documents preserved in the Heilongjiang archives, No. 890 and No. 1,064 show that on Oct. 20, 1941, Takahashi, a general of a Japanese military police unit in Suiyang, Heilongjiang, explained to another general who headed a unit in Suifenhe, “These women are part of 2,000 who were forcibly conscripted from Korea.”

It also describes how Korean women were tricked by the Japanese military and told they would be working “at a restaurant for Japanese soldiers.”

It details specific dates, allowed recreational time and designated comfort women for the different military ranks. It also says that in addition to the brothels run directly by the Japanese army, there were private ones run by Japanese and even makeshift comfort stations aboard ships and trains.

Another report dated Feb. 19, 1938, from a Japanese military police brigade commander in central China says that comfort women were dispatched in proportion to the number of its soldiers. For 25,000 Japanese troops stationed in Nanjing in eastern China, there were 141 sex slaves. This is a ratio of one so-called comfort woman for every 178 soldiers.

However, in Jilin province, northeast China, there were not enough sex slaves and one woman had to serve 267 soldiers. Thus, more women were forcibly recruited locally, the document describes.

The documents revealed by the State Archives Administration also show how women in Indonesia and other Southeast Asian countries were forced into sexual slavery as well.

Qi Xiujuan, head of the Heilongjiang provincial records office, told reporters, “The sexual slavery system infringed upon female human rights and was the cruelest crime, as it physically and mentally plundered the women.”

Ahead of China’s upcoming commemoration of the 70th anniversary of Japan’s surrender next month, the State Archives Administration has also been revealing a series of videos detailing evidence of Japan’s aggressions against women during wartime. From Saturday, it began releasing one video a day in an eight-part series.

“These horrific, institutionalized acts of violence committed by Japanese invaders… constitute state crimes and gross violation of the human rights of the victimized women,” the archive administration says in a preface to its videos.