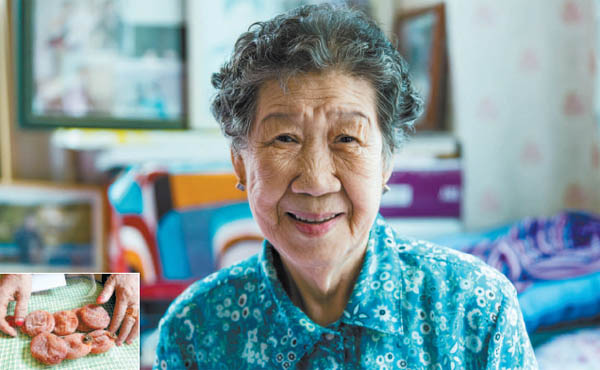 Kang Il-chul, 87, who survived sexual enslavement during World War II, says she eats dried persimmons, inset, when she misses her family. She currently resides at the House of Sharing, in Gwangju, Gyeonggi. The fruit reminds her of her father, a persimmon farmer, whom she last saw at the age of 16 before she was taken away by soldiers to a military brothel in China. By Kim Seong-ryong

Kang Il-chul, now 87, was the youngest of seven children and said she monopolized her family’s time and adoration when she was little. But she is also just one of a handful of living survivors out of perhaps hundreds of Korean women forced into sexual slavery by the Japanese military during World War II.

“My oldest brother and I were 20 years apart, so I was younger than a niece,” she tells the JoongAng Ilbo on July 22, when she sat down for an interview at the House of Sharing, a home in Gwangju, Gyeonggi, for the victims, now elderly, who are euphemistically referred to as “comfort women.”

“I was the youngest of the bunch. So I was very much beloved. Everybody in the neighborhood knew me as the ‘youngest daughter in the gotgam (dried persimmon) house,’” Kang says. “Even someone like me was dragged away.”

When she spoke recently of her hometown, Sangju, in North Gyeongsang, she went from tears to laughing like a child.

Though the events happened over eight decades ago, she recalls her childhood memories vividly.

Her parents had three brothers and four sisters, and her father owned a large persimmon orchard, hence her nickname.

“My mother and father doted on me. My mother embraced me all day long to the point people said that ‘Il-chul is imprinted on her mother in the shape of an ilchul (sunrise).’”

When Kang went to school, her older sisters often worried that something might happen to her and took a detour to drop her off each day.

“I would crouch down on the way, and they would tell me, ‘You’re going to be late.’ But I would say, ‘Unni (older sister), my legs hurt so I can’t go.’ Then they would hurry toward me and carry me on their back. My friends would see me and call me a little rascal.”

When Kang turned 16, rumors spread in the peaceful town that young girls were being delivered to the government.

“I was scared, so I spent a while going around in hiding,” she says. “I went to stay at my mom’s friend’s house in another town. But I couldn’t stay long because I missed my mother.”

She still distinctly recalls the day she was taken away.

“It was a rainy day, and a soldier in a yellowish uniform with a gun and a policeman with a sword came to my home. My parents weren’t there. I took the conscription notice, my body shaking, and followed them, body still shaking.”

She didn’t know for how long she had ridden in the train before arriving in Shenyang in Liaoning Province, northeast China. There, she was put into a truck with a dozen other girls and handed over to a military brothel in Changchun, the capital of Jilin Province.

Scholars estimate that up to 200,000 young women and girls, many of them Korean, were forced into sexual slavery by the Imperial Japanese Army during colonial rule (1910-45) and World War II, and made to serve in military brothels throughout Asia.

Kang, who hadn’t even begun menstruating yet, was forced to service many Japanese soldiers every day.

“If I crouched over because I was scared, soldiers would beat me for not doing as they said. I was a little thing, but they still hit me.”

Because she was young and her body weak, Kang couldn’t bear the hardship and was always sick. The girls had to cleanse themselves with a disinfectant after the soldiers finished with them.

“No matter how much I disinfected myself, I always bled and was feverish. I thought something might be wrong, but what could I do?”

However, one year in late spring, she was diagnosed with typhoid.

“At the beginning, even though I was feverish, soldiers still came in. But when they were told it was contagious, that is when I did not have to service them.”

Though she was in pain, she was relieved she no longer had to service the men. But that, too, was only temporary, and the Japanese who supervised the comfort station dragged away the women who caught contagious diseases to the mountains to be burned.

“I’ll die now,” she remembers thinking as she was taken to a place she didn’t know.

A Korean man came to her rescue, however.

“Firewood was stacked up and just before it was about to be set on fire, Mr. Kim, a Korean man who worked at our comfort station, came and created a distraction. Then several people wearing Joseon-style clothes and straw sandals took me and one other girl and ran away. Later on, I found out that they were independence fighters.”

They helped treat Kang and nurse her back to health and found a place to stay in a nearby cave. Not too long afterward, they heard the news that Korea had been liberated, and Kang was finally able to leave.

But the road back home was long. So, then 22, she headed to Jilin, where she spent the next 30 years working as a nurse. She married and had a child.

After a time - so long that she even lost some of her Gyeongsang dialect - she finally returned to her hometown in 1997.

But her parents and brothers and sisters had all passed away and only an empty lot where her house once stood remained.

To this day, she contends that the tastiest food is dried persimmon.

As a child, her father used to place a dried persimmon by her bedside each night after he returned late from work.

“When I heard a rustling in my sleep, I knew that my father had left behind a gotgam. Then, I wouldn’t be able to sleep and would nibble away at it,” she recalls.

Even now, she still seeks out dried persimmons when she finds herself missing her family, but there is no way to fill the yearning in her heart.

“When I miss my hometown too much, I stop eating them a bit, to settle my heart. On those days, I can’t sleep. Even in my dreams, I feel I won’t be able to see my mom and dad.”

Throughout her interview, Kang dabbed her eyes with a tissue. Her fingernails were painted red and she wore four large, bejeweled rings on her fingers.

“Thank you for saying it’s pretty,” she adds with a bashful laugh - evidence that a trace of Il-chul, the beloved youngest daughter from the persimmon house, remains even after eight decades.