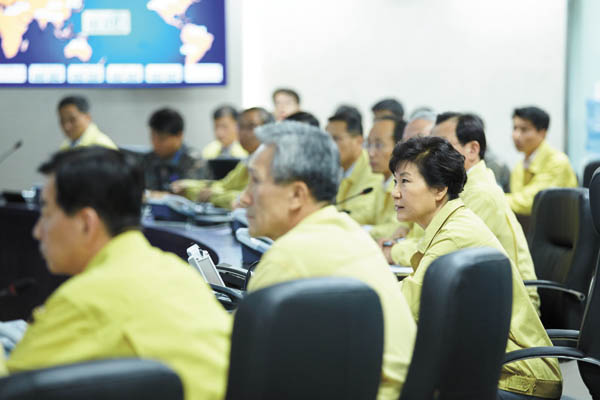 President Park Geun-hye presides over an emergency meeting of the National Security Council at the Blue House at around 6 p.m. on Wednesday to discuss North Korea’s latest military provocation. Provided by the Blue House

South Korea’s military Thursday fired around 30 rounds of 155-milimeter (6-inch) shells across the western border into North Korea, after a shell suspected to have been fired by the North’s army was detected by the military, sending tensions on the peninsula up a notch.

According to the Ministry of National Defense, a projectile suspected to have been launched by the North Korean army was detected by a radar system in Yeoncheon County, Gyeonggi, just south of the heavily armed border, at around 3:52 p.m. Thursday, prompting the military to fire three dozen rounds of shells in response.

“A trajectory of a projectile was detected by the military and no damage has been reported,” a ministry official told the JoongAng Ilbo, an affiliate of the Korea JoongAng Daily. “But in response to the North’s firing of a suspected shell, the military fired back 30 rounds of 155-milimeter shells across the border to a location where the detected projectile was suspected to have come from in accordance with the rules of engagement.”

There was a volley of bullets from the North at around 4:12 p.m.

The military ordered evacuations of about 300 civilian residents in western border areas and put all military units in the country on the highest alert level at 5:40 p.m.

The military said the North Korean army did not respond to the South’s retaliatory shelling.

The North Korean military notified the South at around 5 p.m. that unless it stops all propaganda broadcasts and takes down the loudspeakers within 48 hours, it would launch military action, according to the defense ministry. It did not specify what military measures it would take.

President Park Geun-hye convened an emergency meeting of the National Security Council at the Blue House at around 6 p.m. to discuss the North’s latest provocation.

The suspected projectile from the North is thought to have been aimed at speakers that have been blaring propaganda broadcasts. The military resumed psychological warfare in retaliation for recent land mine blasts in the demilitarized zone that maimed two patrol soldiers.

The North protested the resumption of the broadcasts and vowed to strike the loudspeakers. It has been reported that the North Korean army was beefing up its offensive posture along the borderline in recent days.

The North’s suspected firing across the border on Thursday marked the first such action in almost five years since it shelled South Korea’s western-most Yeonpyeong Island, Gyeonggi, in November 2010, killing two Marines and two civilians.

A military source said while further analysis into the suspected shell would be conducted, it was likely to have been a 122-milimeter rocket.