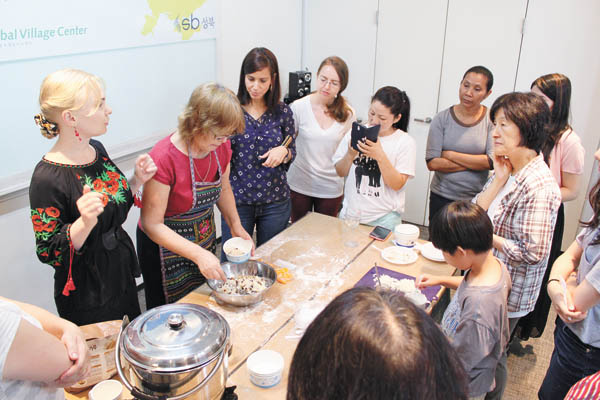 Yulia Savelieva, far left, second secretary at the Ukrainian Embassy in Seoul, leads a cooking class with her mother, second from left, at the Seongbuk Global Village Center. Provided by the center

Yulia Savelieva, the second secretary at the Ukrainian Embassy in Seoul, led a cooking class side by side with her parents, an event that was hosted by the Seongbuk Global Village Center.

This is the second Ukrainian Cooking Class that Yulia and her parents have managed, which was open to foreign residents in the capital on July 31 ahead of Ukrainian Independence Day on Aug. 24

The first was hosted by the Seoul International Women’s Association in late February.

The class began with two rousing performances of Ukrainian folk songs sung by Savelieva’s father, and participants joined hands and danced in a circle to the quick beat of the music.

After the warm up, Savelieva’s mother Tetyana began preparing the dough for the first dish, varenyky, or dumplings made with flour and often stuffed with potatoes, onions and mushrooms.

Savelieva’s mother showed the participants how to prepare the dough for the dumplings, dice the onions for the stuffing and dressing, and knead and cut up the dough into small, round wrappers.

Participants then split into groups and each had the chance to prepare their own. When the dumplings were finished and topped with sour cream and fried onion dressing, there were murmurs of satisfaction around the room as everyone dug in.

Once participants were finished eating, Savelieva and her mother whipped up a bowl of kutya, a sweet grain pudding that is traditionally enjoyed in the winter around Christmas time.

Savelieva explained that Ukrainian children usually prepare the dish and offer it to their godparents, who in turn, treat them with some pocket money.

“You can make kutya with rice, but in Ukraine we often make it with wheat. Ukraine is a very wheat-rich country,” noted Savelieva.

For the class, Savelieva and her parents boiled whole-grain rice for the kutya base, noting it was easy for anyone to find rice in Korea.

With the rice already prepared, Tetyana stirred some Ukrainian honey into it, and as each participant took a taste, added raisins to the mix. She spooned some of the sweetened rice into a smaller bowl for tasting, and topped off the kutya with a circle of mandarin orange slices.

“You can add anything you want and decorate it however you want,” Savelieva said before passing around the kutya. “If you don’t want it sweet, you can add less honey.”

About 20 foreign residents in Seoul attended the course, along with a few Korean nationals who teach at the center.

“I prefer the dumplings, as they were closer to my country’s taste,” said Ozlem Gokcekaya, who is originally from Turkey and studying theater and cinema at Hanyang University in Seoul.

Gokcekaya added that she found all the food delicious, however, and noted that the kutya was convenient for those living in Korea, with rice featuring in most dishes here.

Aris Lau, a mother from Hong Kong who attended the event with her son, said, “The food is very good. Better than I anticipated.”

Lau takes Korean-language classes at the village center, which provides assistance to foreign residents, mainly those within Seongbuk District.

It offers a variety of programs to foreigners to help them settle in Korea, including multilingual-language counseling, and Korean-language and cultural experience classes.