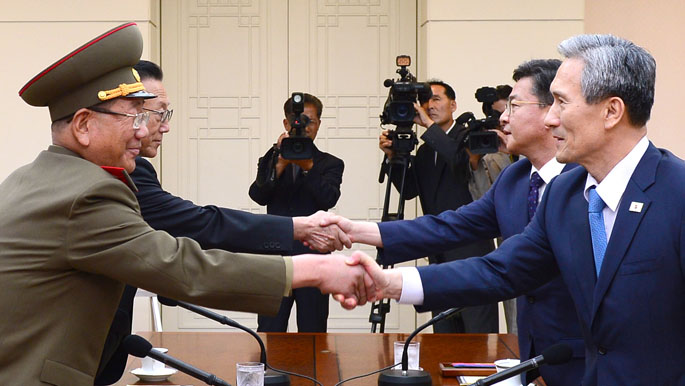 South and North Korea hold high-level talks at the truce village of Panmunjom at 6 p.m. Saturday in an apparent effort to prevent ongoing tensions from escalating into a full-fledged military conflict. From left: Hwang Pyong-so, director of the General Political Bureau of the North Korean Army; Kim Yang-gon, secretary of the Central Committee of the Workers’ Party of North Korea; South Korean Unification Minister Hong Yong-pyo; and Kim Kwan-jin, director of South Korea’s National Security. [NEWSIS]

North and South Korea began a second round of talks around 3:30 p.m. Sunday to defuse rising tensions on the peninsula at the truce village of Panmunjom.

The resumption of the high-level discussions came about 11 hours after the first session was adjourned at 4:15 a.m. at Panmunjom.

South Korea’s Director of National Security Kim Kwan-jin and Unification Minister Hong Yong-pyo joined the talks, as well as Hwang Pyong-so, the director of the General Political Bureau of the North Korean Army, and Kim Yang-gon, the top official in charge of inter-Korean relations for Pyongyang.

Talks were pursued after tensions spiked to levels not seen in years, as the two Koreas braced for a military clash Thursday, when both sides exchanged artillery fire.

The hastily arranged meeting, first proposed by Pyongyang on Friday, has drawn attention for potentially being able to provide North and South Korea an impetus to break their current standoff and achieve a breakthrough in relations.

The fact that North Korea leader Kim Jong-un sent Vice Marshal Hwang, considered his No. 2, to the talks was also seen as significant.

While details of the first round of talks have not yet been made available, South Korea’s presidential office said the four officials had a wide discussion on the current situation, which also touched on landmine detonations in the demilitarized zone (DMZ) earlier this month and the South’s subsequent resumption of propaganda-style broadcasts along the border in retaliation.

Presidential spokesman Min Kyung-wook said during a press briefing early Sunday that the two sides would hold a second round of talks after reviewing each other’s stance on issues addressed in the first meeting.

The second round of high-level talks is expected to focus on the landmine blasts, which Seoul accuses Pyongyang of planting and for which it demands on apology. The North has denied responsibility and called for an immediate halt to propaganda broadcasts along the DMZ.