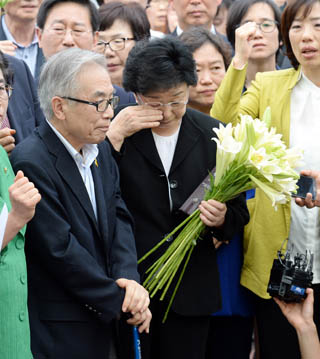 Han Myeong-sook, center, formerly the prime minister under the Roh Moo-hyun government, sheds tears Monday as her colleagues and supporters see her off before she is imprisoned at the Seoul Detention Center in Uiwang, Gyeonggi. Han was convicted by the Supreme Court on Thursday for taking bribes. Her two-year prison term sentence was upheld. [NEWSIS]