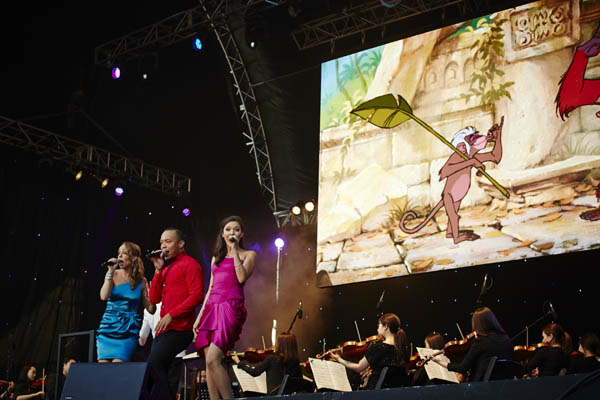 Families can enjoy a cool late summer breeze and hit Disney movie songs next month at Disney in Concert 2. Provided by the organizer

Friday: Maestro Chung Myung-whun of the Seoul Philharmonic Orchestra will hold the baton for Beethoven’s two monumental symphonies, Symphony No. 6, “Pastorale,” and Symphony No. 7.

Symphony No. 6 evokes praise and gratitude for nature, while No. 7 was praised as a consecration of dance by German conductor Richard Wagner. Since Chung has conducted Beethoven’s symphonies numerous times before, his next event is highly anticipated.

Saturday: Pianist Yoon Han will hold his solo concert “Last Summer Party,” which is also titled “The Artiste.” Yoon is famous not only for his outstanding piano playing but also for his skills as a musical actor, music director and entertainer who appeared in MBC’s “We Got Married (Season 4)” and E Channel’s “Love Pawnshop.” His recent concerts have been selling out. The pianist’s first outdoor solo concert will start with him on piano and add various other instruments as the performance goes on. Yoon will play not only classics but also jazz and many different film scores.

SHOW ME THE MONEY 4

Sept. 5 and Oct. 10: Feel the heat of one of the best hip-hop festivals in Korea. “Show Me the Money 4,” a TV audition program which discovers talented rappers, will hold two concerts, one in Seoul in September and one in Busan in October. The program’s seven producers will be the main performers, while the top four rappers are also preparing sets. Not only solo performances but also team sets will entertain the audience.

Sept. 12 and 13: B1A4, which has fascinated fans and audiences with a variety of different concepts at each concert, will hold a concert to show off the group’s new style. At an outdoor theater at Yonsei University, where the audience will be able to enjoy the autumn breeze, B1A4 will captivate the audience for hours by interacting with them. The large stage and variety of settings will complement the band’s music for an unforgettable night.

Sept. 22: Bon Jovi is coming back to Korea after 20 years. With hit songs such as “Livin’ On A Prayer,” “Bad Medicine” and “It’s My Life,” Bon Jovi has amassed 130 million album sales and nearly 38 million concert attendees worldwide.