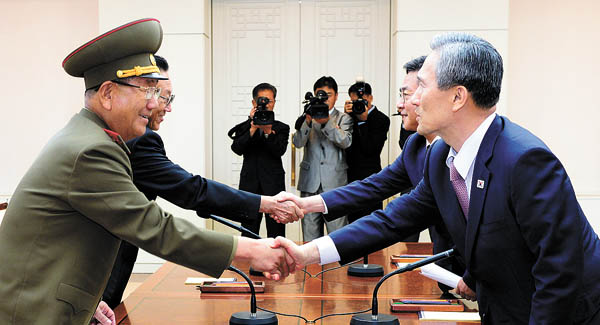 Negotiators from the two Koreas shake hands after they produced a six-point agreement from 43 hours of talks at the border village of Panmunjom on Tuesday. Hwang Pyong-so, director of the General Political Bureau of the North Korean Army, front left, shakes hands with Kim Kwan-jin, director of National Security. Behind Hwang is Kim Yang-gon, secretary of the Central Committee of the Workers’ Party, shaking hands with his South Korean counterpart, Unification Minister Hong Yong-pyo. [NEWSIS]

South Korea pulled the plug on its propaganda broadcasts via loudspeakers in the demilitarized zone Tuesday, in accordance with an agreement drawn up with North Korea in the early hours of the day.

Following through on its side of the agreement, the military halted the broadcasts at noon, putting an end to a 15-day psychological warfare campaign that it resumed in retaliation for land mines planted near one of its bases that blew up on Aug. 4, maiming two soldiers.

North Korea showed signs of complying with its promise to end a “quasi-state of war” declared last week, with frontline soldiers returning to their units from underground shelters, where they were positioned to fire artillery shells across the border.

The Ministry of National Defense in Seoul reported that fully armed North Korean gunners were seen returning to their units and artillery bunkers facing the South were no longer prepared for firing. But ministry spokesman Kim Min-seok said the military couldn’t confirm if the North had retracted all its war preparations. 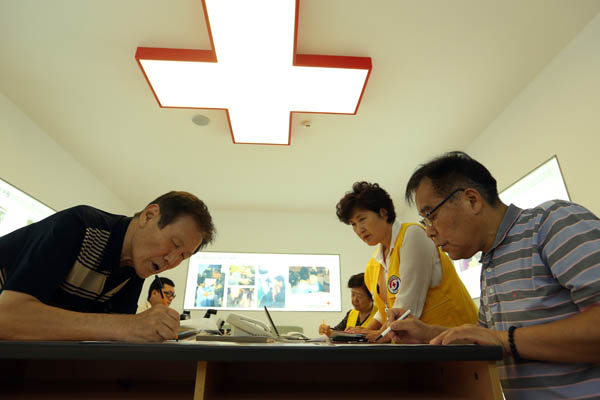 People whose relatives still live in North Korea fill out applications at a Korea Red Cross office in Seoul on Tuesday, after the two Koreas agreed to hold reunions for families separated by the 1950-53 Korean War on the occasion of the upcoming Chuseok holiday in September. By Park Jong-keun

“It takes time to assess the movement of North Korean military units before we decide they ended their quasi-state of war readiness,” Kim told the Korea JoongAng Daily.

The official added that South Korea’s military remained at its highest alert level.

Tensions on the peninsula subsided Tuesday following the announcement of a six-point agreement drawn up by the two Koreas after 43 hours of talks.

The two sides wrapped up discussions around 1 a.m. Tuesday after Pyongyang agreed to express regret over the land mine blasts on Aug. 4. In return, South Korea agreed to stop the propaganda broadcasts.

The North expressed “regret over recent land mine blasts that occurred on the southern side of the demilitarized zone, which maimed two South Korean soldiers.” Getting some kind of acknowledgment of the North’s responsibility for the land mine blasts was the top goal of the South during the talks.

The four-day talks involved Kim Kwan-jin, South Korea’s director of National Security; Unification Minister Hong Yong-pyo; and their North Korean counterparts, Hwang Pyong-so, director of the General Political Bureau of the North Korean Army, and Kim Yang-gon, the secretary of the Central Committee of the Workers’ Party who oversees inter-Korean relations for Pyongyang.

While Pyongyang stopped short of expressing a direct apology, Seoul decided it had effectively conceded responsibility for the land mines. The agreement is also thought to have saved face for Pyongyang because it could assert otherwise domestically.

The South Korean government stressed that it is very rare for Pyongyang to use the term “regret” in an official joint statement with South Korea. Such an interpretation was underscored in President Park Geun-hye’s remarks on the outcome of the talks. She said she “hoped the North’s regret over its provocation and promise that it would not recur” could help the two Koreas “resolve other [inter-Korean] issues on a basis of trust,” according to Blue House spokesman Min Kyung-wook Tuesday.

The agreement leaves open the possibility for Seoul to resume its anti-Pyongyang broadcasts. The pact states that the South would stop the campaign in the absence of any exceptional situations along the border, such as the land mine blasts.

An official at the Ministry of Unification, which oversees inter-Korean relations, said that point in the agreement provides compelling deterrence against further attacks along the border.

“We would have no leverage to prevent another provocation if we had merely stated the two sides would work together against the recurrence of provocations,” said the official, who spoke on the condition of anonymity. “But by stating the punitive measure would be reinstated in case another provocation occurs, we now have stronger deterrence and leverage.”

According to the official, the two top officials from Pyongyang wanted to focus on thawing frosty inter-Korean relations instead of addressing the issue of the land mine detonations during the talks. The North Korean officials stressed that talking about the future was more important than harping about the past, a remark the official said had apparently upset national security adviser and former Defense Minister Kim.

“We assured the North Korean counterparts that no progress could be made unless the issue of the land mine blasts was resolved,” the ministry official said.

Chief national security adviser Kim was reported to have mentioned his career as head of the South Korean military before taking his current position to stress how important it was for him on a personal level to settle the issue.

Under the six-point deal, the two Koreas also agreed to hold talks either in Seoul or Pyongyang to improve inter-Korean relations on multiple fronts, including in business cooperation and cultural exchanges.

One Defense Ministry official told the JoongAng Ilbo, an affiliate of the Korea JoongAng Daily, that a large number of North Korean submarines that had embarked on operations over the weekend were confirmed to have returned to their stations. These movements were also thought to have been part of the North’s “quasi-state of war.”

The four-member panel also agreed to arrange working-level talks on reunions for families separated by the 1950-53 Korean War on the occasion of the Chuseok holiday next month.

The reunions have been sought by the Park Geun-hye government for months. Such reunions are indicators of how warm or chilly ties between the two Koreas are.

While the four negotiators did not discuss lifting the so-called May 24 economic sanctions, imposed in retaliation for the sinking of the Cheonan warship in 2010, which killed 46 sailors, the prospect of Seoul moving to remove the sanctions could materialize, as the two sides have agreed to facilitate “multi-faceted” dialogue.

“This six-point agreement carries significance, as it sets new momentum for improvement in Seoul-Pyongyang ties after years of strained relations dating back to the Lee Myung-bak government,” said Lim Eul-chul, professor of North Korean studies at Kyungnam University.

Lim noted that the agreement was possible partly due to President Park’s strong stance that North Korea must apologize for the land mine incident if it wanted the broadcast campaign to stop.

“North Korea must have felt a much stronger position from our side compared to the past by previous governments,” Lim added.

The six-point pact was the culmination of a six-day drama in which the two rivals braced for a direct military clash at one of the most heavily armed zones in the world. The crisis began last Thursday when the North Korean army along the DMZ fired artillery shells across the border into the South, apparently as threats to the loudspeakers blaring propaganda.

The South fired back, although it did not lead to a wider conflict.

On the same day, North Korean leader Kim Jong-un ordered his troops to prepare for a “quasi-state of war” and delivered a 48-hour ultimatum to the South to stop the broadcasts, warning of dire consequences.

Unbowed by the threat, the South Korean military vowed to strike back at any attacks in collaboration with United States forces. Just hours before the 48-hour deadline, the first round of talks was held at the border village of Panmunjom on Saturday, which stretched to 12:55 a.m. Tuesday.