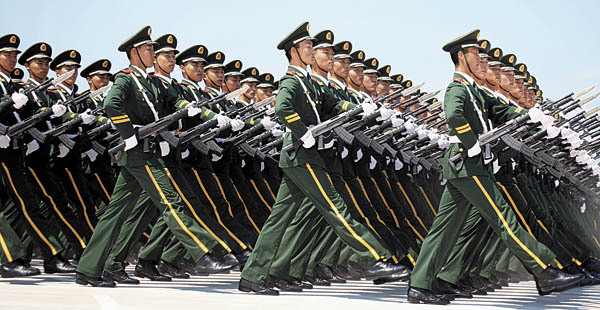 Soldiers take part in training for a military parade in Beijing on July 23. China will hold a grand military parade next Thursday to mark the 70th anniversary of victory in the Chinese People’s War of Resistance against Japanese Aggression and the World Anti-Fascist War.[XINHUA/NEWSIS]

North Korean troops will not be marching in the parade.

“Taking into account the friendship and cooperative ties with our neighbor China and to encourage China’s role in contributing to the peace and unification of the Korean Peninsula, we decided to attend the events to mark the Victory Day, including the military parade,” presidential spokesman Min Kyung-wook said. “We also kept in mind the historical fact that Korea’s independence fighters were active in China.”

Park will be the first Korean president to attend a military event organized by China, despite the two countries’ brutal history of conflict in the Korean War. The United Nations force led by the United States fought for the South, while China’s People’s Liberation Army fought for the North during the 1950-53 war that ended with a cease-fire.

Korea and China established diplomatic ties in 1992, but political and military exchanges have been far less robust than economic and cultural relations.

Park will visit Beijing and Shanghai on a three-day trip that will begin Wednesday. To mark the 70th anniversary of the end of World War II, a lavish military parade will be held in Beijing’s Tiananmen Square on Thursday. Leaders from 30 countries, including Park, will attend the event.

An official from the Blue House said North Korean soldiers will not be in the parade, allowing Park to attend the event. “We were able to make the decision [to attend] because that obstacle was removed,” he said.

When China announced its plan to hold the parade and invited other countries to send troops, it created a diplomatic headache for Seoul. North Korea’s participation and South Korea’s relationship with the United States were key factors in deciding Park’s attendance, Seoul officials said.

While the government was positively considering Park’s attendance for the past two weeks, the final decision was only made around 8 p.m. Wednesday night.

Diplomatic sources said China accommodated Seoul by eliminating military units that participated in the Korean War from the parade. It also made clear earlier this week that North Korean leader Kim Jong-un will not be attending the event, nor will any North Korean soldiers.

China has stressed that the parade is to commemorate the 70th anniversary of “victory in the Chinese people’s resistance against Japanese aggression and world anti-Fascist war,” in order to dilute the international community’s concerns. Many countries, including the United States, Japan and European nations, believe Beijing wants to use the parade to demonstrate China’s growing military profile.

Finding a delicate diplomatic balance to accommodate the United States, Korea’s ally, was also an important task. The Blue House announced on Aug. 13 that Park would visit Washington and have a summit with U.S. President Barack Obama on Oct. 16.

The early announcement of the U.S. trip was a surprise. It is customary for a presidential trip to be announced only about three weeks ahead of time. Diplomatic analysts said Seoul wanted to announce Park’s U.S. trip before the trip to China to stress the importance of the Korea-U.S. alliance.

The same pattern was repeated this week.

Before announcing Park’s attendance of the military parade in Beijing on Wednesday night, the Ministry of Foreign Affairs announced earlier in the day that Foreign Minister Yun Byung-se will meet his U.S. counterpart John Kerry at the end of this month on the sidelines of the Conference on Global Leadership in the Arctic: Cooperation, Innovation, Engagement and Resilience (GLACIER). The meeting takes place in Anchorage, Alaska on Sunday and Monday.

While South Korea is not contributing troops to the parade, the Ministry of National Defense said it will send a team of observers. The term “observers” was chosen instead of “delegates” in deference to Korea’s alliance with the United States, the ministry said.

It remains to be seen if Washington will be displeased with Park’s decision to attend the military parade. “Participation in these events is the sovereign decision of each country. We respect the Republic of Korea’s decision,” a U.S. State Department spokesperson told Yonhap News Agency.

The United States is sending its ambassador to China, Max Baucus, rather than sending a higher-profile delegate from Washington.

Japanese Prime Minister Shinzo Abe will not attend the events, and the Japanese media criticized Park’s decision to attend the military parade, saying it harmed the trilateral cooperation between Seoul, Washington and Tokyo.

Compared to South Korea’s prominent presence at the events, North Korea, China’s ally, will have a low profile. Choe Ryong-hae, a senior Workers’ Party secretary, will represent the North.

“When world leaders are watching the military parade in Tiananmen Square, 30 heads of state will stand on the front row with Chinese President Xi Jinping, and Choe is expected to stand behind them in the second row,” a source in Beijing told the JoongAng Ilbo, an affiliate of the Korea JoongAng Daily. “Taking into account the [recent] improvement in inter-Korean relations, China may deliberately place Choe behind Park so they can talk.”

The Blue House also made public other details of Park’s three-day China trip. On Wednesday, Park will have a bilateral summit with Xi. Thursday will be devoted to attending the Victory Day commemoration events, including the military parade and a presidential luncheon hosted by Xi.

Since she took office, Park has had five summits with Xi. Park is expected to discuss a plan to hold a Korea-China-Japan summit before the end of this year.

During trilateral foreign ministerial talks in March, the three countries agreed to hold the summit as soon as possible.