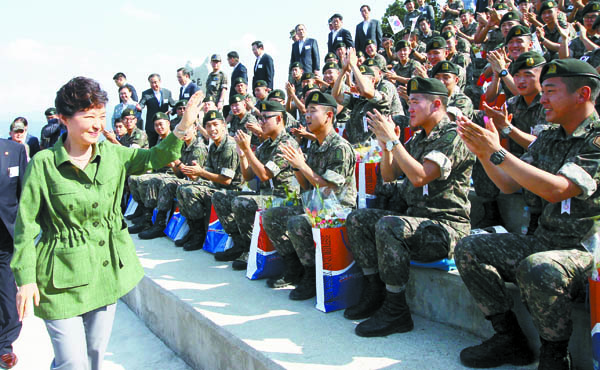 President Park Geun-hye greets draftees who postponed their date of discharge in the wake of escalating tension on the peninsula in Pocheon, Gyeonggi, on Friday, after presiding over a live-fire artillery drill by South Korean military and U.S. Forces. [NEWSIS]

President Park Geun-hye presided over a live-fire artillery drill by South Korean military and U.S. forces in the border city of Pocheon, Gyeonggi, Friday, in a symbolic gesture reaffirming the Korean-American alliance and demonstrating the country’s military readiness just days after the two Koreas signed a deal to defuse tensions on the border.

The exercises, which involved 47 military units and 2,000 soldiers from the two allies, are the first such joint live-fire drills in three years and the largest since Korea and the U.S. first conducted such heavy-weaponry exercises in 1977, according to the Ministry of National Defense.

It was Park’s first time presiding over such a drill, known as the Integrated Firepower Exercise 2015, since she took office in February 2013. This year was the eighth such exercise.

The military made clear the exercises were designed to deter North Korean provocations such as the planting of three land mines in the southern border of the demilitarized zone near Paju, Gyeonggi, which were triggered Aug. 4, maiming two South Korean soldiers.

“[President Park’s decision to] observe the drill will serve as momentum to ensure our military’s dignity and state-of-the-art military prowess,” said Blue House spokesman Min Kyung-wook. He said her presence would also solidify ties between the United States and South Korea.

Friday was the last of the four sets of drills, which took place over 17 days. In this year’s exercise, K-2 Black Panthers, FA-50 fighter jets and K-21 armored vehicles were mobilized from the Korean side. U.S. forces dispatched Bradley fighting vehicles, Apache helicopters and A-10 Thunderbolts among other weapons.

Pyongyang has consistently called on Seoul to cease joint military drills with Washington, often in the form of conducting test-firings of missiles, rockets and artillery to express its dissatisfaction. The communist regime sees the drills as an “implicit threat” to its national security and a “rehearsal for invasion.”

North Korea did not make an immediate statement about Park’s observation on Friday.

In a ceremony welcoming her to the drill, Park was seen wearing a khaki jacket and long, gray pants along with a pair of grey, low heeled pumps.

The 70-minute artillery drill, which Park observed with a faint smile, was based on a scenario that Pyongyang fired at a South Korean guard post and Seoul and Washington joined forces to retaliate.

Park was also spotted applauding at a video showing the Guided Bomb Unit 28, a 5,000-pound air-to-surface bomb that Washington agreed to sell to South Korea in 2009. Loaded on an F-15K, the bomb is guided by a laser system and penetrates a bunker to blow up facilities inside.

Park did not give a speech.

Among the people who accompanied her in observing the drill were 86 military conscripts who postponed their date of discharge in the wake of escalating threats from North Korea this month.

Park took time to meet a few of them after the drill, and reportedly praised their patriotism. A total of 87 draftees - 86 from the Army and one from the Navy - had requested to serve longer terms in the national military by Monday, when inter-Korean tensions were at their highest.

The approval ratings for Park hit 49 percent in a poll conducted by Gallup Korea between Tuesday and Thursday, the highest this year and a sharp 15-percentage point increase from last week. Those who approved of her performance outnumbered those who did not - 44 percent - for the first time in 10 months.

The two Koreas produced a six-point agreement after 43 hours of talks at the border village of Panmunjum on Tuesday, ending a psychological warfare campaign that began with land mine explosions near a South Korean base.