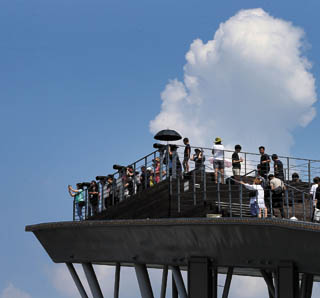 Tourists observe the North Korean side from Imjingak Pavilion near the inter-Korean border in Paju, Gyeonggi, Sunday. The observatory deck was closed recently after North Korea threatened war but reopened after the two Koreas reached a deal last Tuesday, avoiding military confrontation. The Red Cross in North and South Korea also agreed over the weekend to hold working-level talks on Sept. 7 to discuss reunions for the families separated during the 1950-53 Korean War. By Shin In-seop

Pyongyang on Saturday immediately accepted an offer from the South Korean Red Cross to hold working-level talks on Sept. 7 to discuss reunions for families separated during the 1950-53 Korean War, the latest in a series of steps by both countries to decrease tensions on the peninsula.

The South Korean Ministry of Unification said Saturday that the North sent a letter at 1 p.m. that day through its contact channel at Panmunjom agreeing to Seoul’s offer for talks made the previous day.

Pyongyang’s response came unusually quickly, within 27 hours since the South’s Red Cross proposed Friday to hold talks at the House of Peace located in the truce village of Panmunjom in the demilitarized zone.

North Korea is known for being flippant, oftentimes asking to change the location of the talks or not responding until the day before a scheduled meeting.

“That kind of response by North Korea shows Kim Jong-un’s intentions through controlling the current situation,” said Kim Yong-hyun, a North Korea studies professor at Dongguk University. “If there are no [additional] provocations from Pyongyang, there is a high likelihood that the family reunions will proceed smoothly and as planned.”

The two sides agreed to continue reunions for families separated by the Korean War as part of a six-point deal struck Tuesday following a marathon session of high-level talks between Seoul and Pyongyang.

The landmark inter-Korean agreement, praised by the North Korean leader afterward, abated ongoing military tensions and ended Pyongyang’s declaration of a quasi-state of war and Seoul’s loudspeaker propaganda broadcasts across the border.

The broadcasts were made in retaliation for land mine blasts on the South Korean side of the inter-Korean border that maimed two South Korean soldiers on Aug. 4. Pyongyang initially denied having planted the devices but issued a rare expression of “regret” on Tuesday in accordance with the agreement.

The two sides also agreed to resume family reunions around the Chuseok holiday, which falls on Sept. 27, as well as bolster inter-Korean exchange and cooperation.

To take into account preparation time, however, the reunions may be pushed back until early October. In the past, reunions have taken place on average about a month after working-level talks.

The date also considers the celebration on Oct. 10 marking the founding of the North Korean Workers’ Party.

The working-level talks on Sept. 7 will be the first since the joint agreement. It is expected officials will discuss regularizing family reunions, as well as the anniversary event for the North Korean Workers’ Party.

The location of the reunion, the size and other details are also expected to be outlined in the meeting.

“Any problems regarding the Red Cross working-level talks will be discussed through the Panmunjom contact channel,” a Unification Ministry official said on Sunday. “If this family reunion happens, this would be the second family reunion since the Park Geun-hye government came into office and the 20th in total.”

The first inter-Korean family reunions date back to August 2000, with the most recent being in February 2014.

owever, there is concern that Pyongyang could fire a long-range rocket to coincide with the upcoming anniversary of the Workers’ Party founding, souring the progress in inter-Korean relations.

“North Korea knows very well that the upcoming family reunions will serve as an inflection point for inter-Korean relations,” said Kim Keun-sik, a political studies professor at Kyungnam University. “So it may avoid acting in a provocative manner on the founding day of its Workers’ Party.”

“These working-level talks are a joyous tiding, like sweet rain falling after a long drought, for the families torn apart from their relatives,” ruling Saenuri Party spokesman Kim Young-woo said in a briefing.

Similarly, main opposition New Politics Alliance for Democracy spokeswoman Yoo Eun-hae said, “We especially hope that through these talks, a way to regularize family reunions can be agreed upon.”