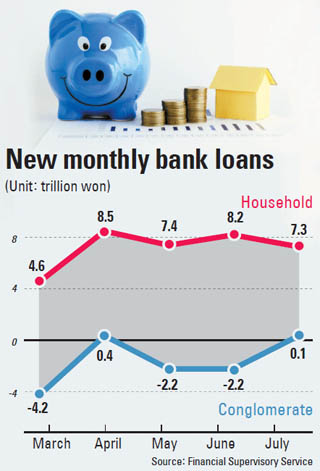 Household debt has continued to rise and, for the first time in two months, overdue payments have also increased, according to the Financial Supervisory Service (FSS) on Tuesday

The agency said local banks’ outstanding lending to companies and households as of July stood at 1,295.5 trillion won ($ 1.1 trillion), up 0.4 percent or 5.8 trillion won from the previous month.

However, the figure does not include mortgage-backed securities by the Korea Housing Corporation. When these figures are included, the increased debt rises to 7.3 trillion won.

The increase in household debt, particularly mortgages, came despite the summer months being a seasonally slow month in the real estate market. According to its data, monthly apartment sales in Seoul more than doubled from 6,100 during May last year to 12,600 during May this year.

“The low interest rate environment had sparked home sales,” the FSS said. The announcement by the financial authority in July to tighten the loan evaluation next year to curb the rapid expansion of loans also seems to have encouraged people to rush to the banks.

While debt continues to grow, the delinquency ratio has risen for the first time in two months. In June, the overdue loan payment ratio fell from 0.8 percent in May to 0.61 percent in June. But in July it inched back up to 0.69 percent.

“The rise in the corporate delinquency ratio appears to be due to ongoing restructuring of a number of firms.

“Although the overall delinquency ratio has gone up month-on-month, its figure compared with a year before has gone down. A fairly encouraging sign,” the FSS said.

“We will continue monitoring for signs of default risks in weak industries as well as the increase in household debts.”