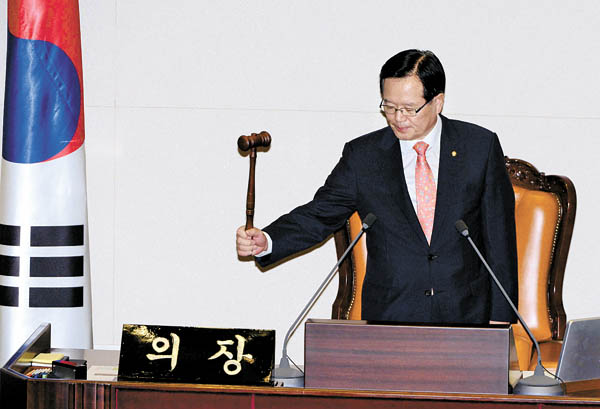 Assembly Speaker Chung Ui-hwa declares the opening of this year’s regular session of the National Assembly on Tuesday. [NEWSIS]

The legislature on Tuesday started its last regular session for the 19th National Assembly, and over the next 100 days, fireworks are expected over the budget for next year, labor reforms and special funds doled out to government officials and lawmakers.

The National Assembly held an opening ceremony Tuesday afternoon, and representatives of the ruling and opposition parties will give speeches on Wednesday and Thursday to present each party’s plan for the current session. Chairman Kim Moo-sung of the ruling Saenuri Party and the main opposition New Politics Alliance for Democracy (NPAD) floor leader Lee Jong-kul will give speeches.

The assembly’s audit of the government is scheduled to take place from Sept. 10 to 23 and from Oct. 1 to 8. From Oct. 13 to 16, the lawmakers will have opportunities to question the government on various issues, including foreign affairs, national security, the economy and education.

The budget review will follow later in October. Under the revised law governing the National Assembly, the budget bill for next year will automatically be introduced to a vote on Dec. 2 in order to meet the statutory deadline.

While the upcoming session is expected to deliberate major bills, including the Park Geun-hye administration’s initiative to overhaul the country’s labor laws, the ruling Saenuri Party and opposition NPAD are already bickering over special operation allowances. The NPAD is demanding a budget review into them.

Controversy over the special funds, granted to government officials and lawmakers on a monthly basis, started last month after South Gyeongsang Gov. Hong Joon-pyo said he had received up to 50 million won ($42,430) of special operation expenses per month when he served as the ruling party’s floor leader.

A National Assembly source told the JoongAng Ilbo, an affiliate of the Korea JoongAng Daily, that the money came from the National Assembly’s special expenses account. Because the ruling party’s floor leader is automatically chairman of the house steering committee, he is entitled to the special expenses. A floor leader of the ruling party receives a total of 416 million won of special funds, separate from his salary as a lawmaker, every year, the source said.

A floor leader of the opposition party also receives some special funds, the source added, and the grants are intended to support such activities as meals for lawmakers. No receipt, however, is required to process the money, and about 8.398 billion won of special funds are earmarked for the National Assembly this year.

According to the NPAD, about 880 billion won of special operation expenses are earmarked for the government as a whole this year, and the National Intelligence Service is allocated with 478.2 billion won. The NPAD argues that it will take the first step to lay bare the details of its lawmakers’ special funds, and the ruling party and the government must follow suit.

The two parties argued about the issue through Monday, the final day of an extraordinary session in August, but failed to find common ground. They had talks about the issue on Monday, but the 70-minute negotiation broke down over the opposition party’s demand that a subcommittee of the special committee on budget and accounting be established to examine special operation allowances for the government and National Assembly.

While the Saenuri Party criticized the NPAD for trying to hinder the legislative schedule by concentrating on a minor issue, the NPAD vowed to realize its demand for transparent oversight.

“About 90 percent of the 880 billion won worth of special operation expenses are security budgets of the National Intelligence Service, prosecution, Ministry of National Defense, Ministry of Justice and the presidential office,” Rep. Cho Won-jin, deputy floor leader of the Saenuri Party, said Monday. “Laying bare the details of the money can shake national security.”

Rep. Kim Sung-tae, the Saenuri Party’s chief negotiator for the special committee on budget and accounting, said the NPAD has a higher agenda.

“The opposition party wants to review all details of the special operation expenses because of its deeply rooted distrust of the intelligence agencies,” Kim said. “But current laws bar the legislature from scrutinizing the expenses. Yet the NPAD is boycotting the legislative session in order to conduct a review in violation of the laws.”

NPAD floor leader Lee said Monday that government agencies are spending tax money freely using the justification of special operation expenses. “We want to change this practice,” Lee said. “It is a government budget without oversight, and we want to resolve this problem during this legislative session.”

National Assembly Speaker Chung Ui-hwa said Tuesday that the NPAD’s proposal to strengthen the transparency of the special operation expenses is worth considering. In an interview with MBC radio, Chung, a former Saenuri lawmaker who gave up the affiliation with the ruling party after being elected speaker, supported the opposition party.

“Because about half of the special operation funds are used by the National Intelligence Service, and more than 95 percent of the money is used by the government, transparently revealing 100 percent of the details is realistically, technically and physically impossible,” Chung said.

“But I think there is a need to discuss how to operate this money more transparently in the future by creating an oversight committee.”