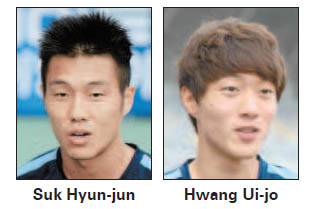 Korea is anticipating a blowout in the second round of the 2018 World Cup Asian qualifiers tonight, as the Taegeuk Warriors take on Laos in Hwaseong, Gyeonggi.

It is widely expected that Korea, ranked 54th according to FIFA, will have it easy against Laos, ranked 177th. The national squad has never lost to Laos in their last three encounters. Their most recent match was in April 2000 at the Asian Cup qualifiers, where Korea blanked Laos 9-0.

However, local football fans have recently been calling for the team to get more aggressive and start scoring some goals. Although Korea won the EAFF East Asian Cup last month, the team was criticized for not putting more numbers on the board.

“In order to score, you first need to create a lot of opportunities,” coach Uli Stielike said. “We are moving positively in that aspect.”

One twist for tonight’s match is the absence of striker Lee Jeong-hyeop, who was dropped from the squad due to injury. The 24-year-old Sangju Sangmu player suffered a compound facial fracture in a match against Gyeongnam FC in their second-division K-League Challenge match last Wednesday. He is expected to be sidelined for about two months.

Lee has been a regular pick for Stielike, scoring four goals in 13 matches for Korea and bringing energy to the pitch. Although Ulsan Hyundai’s 196-centimeter (6-foot-5) striker Kim Shin-wook was on the preliminary list, Stielike decided to pick Sagan Tosu midfielder Kim Min-woo to replace Lee in the squad.

This means the national team will use Vitoria Setubal striker Suk Hyun-jun and Seongnam FC forward Hwang Ui-jo up front. Hwang was originally classified as a midfielder but is now being given a goal-scoring role.

“By looking at his recent performances, Hwang should be playing striker,” Stielike said. “As Hwang goes up, we need another player who can play on the flanks, so that’s why we picked Kim Min-woo.”

Football pundits expect Suk to start against Laos, using his 190-centimeter height to dominate in the air. In the training session on Tuesday, Suk was the main striker for the 7 vs. 7 practice match.

Suk, 24, joined the national team for the first time since 2010. He has been hot with Portuguese club Vitoria Setubal, scoring three goals in three matches. The former Ajax and Groningen player scored 10 goals in the Portuguese Primeira Liga last season.

“No one knows who will score the goal, but what’s important is that you should be a player,” Suk said. “Inside the penalty area is my zone. I will move more aggressively than anyone else.”

Hwang is looking for his first national team debut in the match. He is known for working hard on the pitch as well as his sharp shooting. The 23-year-old has 10 goals in 25 matches in the K-League Classic this season, currently top among Korean players and third overall in the league.

“This is very important time for me because I can show myself,” Hwang said. “I will try to show everything I have on the pitch.”

Stielike hopes that Suk and Hwang will carry their strong club performances over to the national team.

“It’s going to be important how these players can convert scoring chances,” he said. “My orders will be important, but they should really show good performances on the pitch.”

In the center, Swansea City midfielder Ki Sung-yueng will be controlling the tempo of the game, as well as wearing the captain’s armband.

“I hope players will be confident while delivering a big victory against Laos,” Ki said. “But this kind of match is hard. Laos will obviously play defensively, and to break that hard line of defense, we need to play delicately.”