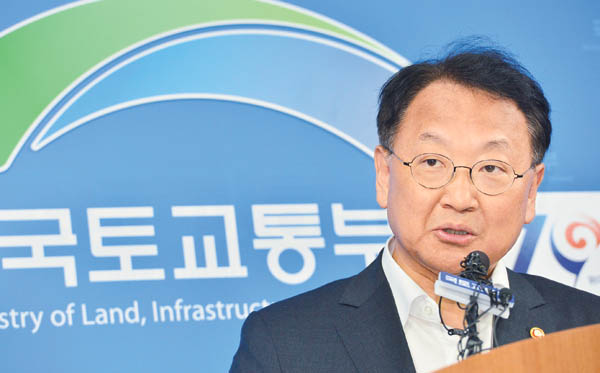 Yoo Il-ho, the minister of land, infrastructure and transport, announces plans to offer low-interest loans to homeowners to remodel their homes into multiple studio apartments. The government will also manage the rental units and oversee construction. [NEWSIS]

The government is getting into the home renovation, loan and rental business for the first time, to tame surging jeonse (lump-sum deposit) and monthly rent increases.

Under the plan to “stabilize housing for low-wage and middle-class people” the government will encourage homeowners with old houses to remodel them into multi-family residential units for by offering state subsidies.

The Ministry of Land, Infrastructure and Transport unveiled the plans Wednesday to loan homeowners up to 200 million won ($169,200) to remodel a house older than 10 years and bigger than 100 square meters (1,076 square feet) into a multi-unit residential building. The loan will be offered at an annual lending rate of 1.5 percent.

The entire process will be managed by the state-run LH Corporation, from signing a contract with a private builder, managing construction and even running the rental business afterwards. After the construction is complete, the owner entrusts the government to run the home’s rental business for eight to 20 years.

After the contract period ends, the owner can end the deal with the government. Owners can select the term for the contract to run from eight, 12, and 20 years.

It is the first time for the Korean government to run such a rent business by refurbishing old private houses.

Starting next year, the government’s goal is to turn a total of 150 old houses into residential buildings to accommodate 1,000 households.

“Basically, this policy is aimed for retired people, who own a house but have no regular income after retirement,” said a Land Ministry official. “Target tenants are mainly the underprivileged class, such as the elderly or university students who live alone but pay monthly rent fees. And that’s the reason why the government takes the right to run the business.

“Although we said it is ‘remodeling business,’ it is actually abolishing the current house and building a new one. New houses will be mostly so-called ‘one-room studios,’ to accommodate underprivileged people living alone.”

Rental fees will be about 50 percent cheaper than market prices, the ministry said.

Under the government’s scenario, the owner of a 100-square-meter house in Jeongneung, northeastern Seoul, could receive about 650,000 won every month as net profit.

If the owner remodels his house into a three-story building with six single-room units plus his own unit, and receives about 280,000 won per unit, the total revenue will be about 1.68 million.

It costs about 200 million won to renovate the house, and the owner would pay back about 930,000 won on average each month for the principle and interests over 20 years. Monthly taxes for the rent business will be about 100,000 won. As a result, the net monthly profit for the owner is about 650,000 won.

Considering the owner could receive a small amount of lump sum money as deposit at the same time, about 3 or 4 million won for each unit, the total revenue could rise.

“Many old retirees welcomed the idea, based on our own survey in Jeongneung, where many retirees are living,” he said. “Although they will have to live in a smaller area than previously, they can receive the rental fees without taking care of anything.”

Expatriates who own their own houses in Korea can also apply for the scheme, the official said.

The government also considered remodeling some empty houses in the country, but those houses are mostly located in remote areas and lack public demand.

However, Kwon Dae-jung, a real estate studies professor at Myongji University, said the unique policy was lacking in efficiency.

“The offer of a 200 million won loan with 1.5 percent rate is insufficient for homeowners,” said Kwon. “They need a place to live for the construction, which usually takes about 4 months, so the government should support that.

“Also, many Korean owners would be reluctant to live with the elderly living alone,” he said. “They wouldn’t see much benefit solely from the discounted rental fees.”

Most of all, the policy was not a solution for the skyrocketing jeonse prices, he said. “Most of the houses to be renovated would be single-room studios,” he said. “But most of jeonse houses lacking in the market are for those with two rooms or more.”

“Given the fact they can receive about 10 million won of deposit plus 300,000 won or 400,000 won of monthly fees for a single-room studio in Seoul, they wouldn’t be willing to lower monthly payments with such a small deposit,” Kim said.

“Also, amid low lending rates now, there’s no reason for homeowners to borrow money from the government and entrust their business for 20 years.”