Men at the top

Men at the top 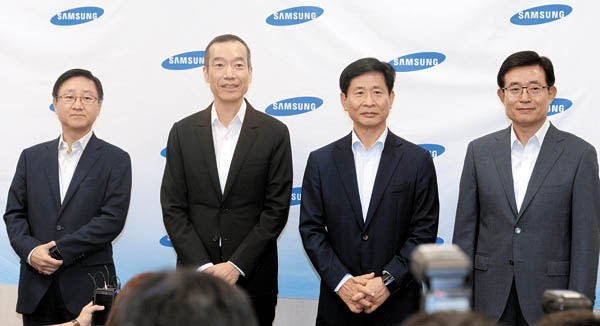 The new CEOs of Samsung C&T faced the press at a ceremony held at Samsung Electronics’ headquarters in Gangnam District, southern Seoul, on Wednesday. They are, from left, Kim Shin, head of the company’s trade business; Choi Chi-hoon, head of the board and head of its construction business; Yoon Ju-hwa, head of fashion; and Kim Bong-yung, head of resort construction. Samsung C&T and Cheil Industries merged as a single company on Sept. 1, four months after the plan was announced. Samsung C&T has the largest number of CEOs, even within Samsung Group, as it includes the two daughters of Samsung’s chairman, Lee Kun-hee. The older daughter, Lee Boo-jin, and the younger sister, Lee Seo-hyun, are CEOs of Samsung C&T. In total, there are six CEOs. The newly merged company will be listed on the stock market on Sept. 15. It will be the fourth-largest company by market capitalization, trailing after Samsung Electronics, Hyundai Motor and the Korea Electric Power Corporation. [NEWSIS]