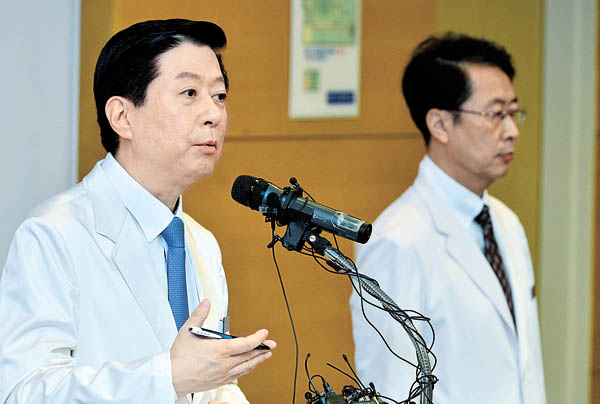 Song Jae-hoon, left, president of Samsung Medical Center, announces changes in the wake of the recent Middle East respiratory syndrome outbreak Wednesday at the hospital. The hospital is changing its emergency ward. [NEWSIS]

After being blamed for making the recent Middle East respiratory syndrome (MERS) outbreak far worse than it should have been, Samsung Medical Center announced Wednesday it is investing 100 billion won ($85 million) in vaccine development and general reform of the hospital and its procedures.

The announcement follows a June apology by Samsung Electronics Vice Chairman Jay Y. Lee, the only son of Samsung Group Chairman Lee Kun-hee, in which he promised the hospital would clean up its act. In the outbreak of the sometimes-deadly respiratory disease from May to July, 186 people were confirmed for MERS and 36 of them died.

Samsung Medical Center, formerly considered one of Korea’s best, was blamed after a total of 91 people were infected there, including 81 who contracted the disease from Patient No. 14, a so-called super-spreader.

Song Jae-hoon, president of the hospital, held a press conference on Wednesday at the hospital to disclose detailed plans of the changes.

“First of all, we would like to express our deepest apologies again to those who were infected in our hospital, the victims, their family members and the public for what they have gone through with the MERS outbreak,” Song said. “After the outbreak, we’ve collected various opinions and have come up with follow-up measures for patient safety and quality medical service. We are investing 100 billion won for vaccine development, reform of emergency systems and new infrastructure for patient safety,” he
added.

Samsung Medical Center said it is spending 41 billion won over the next five years to develop vaccines for new types of infectious diseases, including MERS, which is still prevalent in the Middle East.

Given the complex nature of the research, the hospital is entrusting the International Vaccine Institute (IVI), a Korea-based institute founded by the United Nations, to determine where to spend the money. The rest of the investment will go towards overhauling Samsung’s own emergency ward and emergency treatment procedures.

Most MERS patients at Samsung Medical Center contracted the disease in the emergency ward, where Patient No. 14 stayed for three days.

Samsung Medical Center is enlarging its emergency ward and changing its layout.

“The new emergency room will be divided into six different departments for respective treatments,” Song said, “and we are separating infectious disease patients from others completely with 11 new negative pressure quarantine rooms in the emergency ward.”

Negative pressure rooms have lower air pressure than outside to prevent microbes from escaping with air.

The hospital also wants to reduce the overpopulation of its emergency ward, which was considered the cause of MERS spreading so widely.

“The overpopulation of the emergency ward is a problem that needs a fundamental solution. Patients have to be discouraged from rushing to general hospitals,” said CHA University School of Medicine Prof. Jeon Byeong-yul, a former director of the Korean Centers for Disease Control and Prevention.