Ryu going for gold at the IOC

Ryu going for gold at the IOC 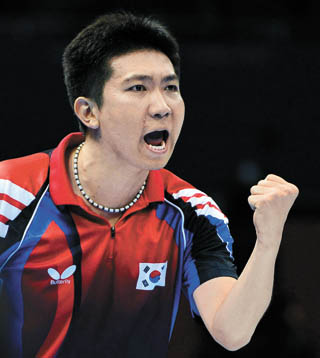 At the 2004 Summer Games in Athens, Ryu Seung-min faced then world No. 4 Wang Hao of China in the men’s table tennis singles final.

The expectation of grabbing Olympic gold was low because Ryu had never won against Wang in their previous six encounters.

Just as in the 2004 final, Ryu delivered another surprise last month when the 33-year-old was chosen to be Korea’s candidate for membership in the International Olympic Committee (IOC) Athletes’ Commission.

But after the KOC conducted interviews, Ryu was selected as the final candidate to succeed Moon Dae-sung, the current IOC athlete member. The election for the new IOC athlete member will be held during the 2016 Summer Games in Rio de Janeiro.

Ryu, who also won silver and bronze medals in his last four Olympic appearances, reportedly edged out Jang and Jin because of his English speaking skills. According to the KOC, English skills account for 40 percent of its interview evaluation.

In an interview with Ilgan Sports, an affiliate of the Korea JoongAng Daily, last week, Ryu said he is “ready to supply energy” to the sports community. Ryu, who is also an Asian Games gold medalist in men’s double, retired from playing last year and has been working as a coach for Samsung Life Insurance’s table tennis team.

Q. Why did you decide to run for IOC athlete member?

A. I used to have thoughts about working as a sports administrator. After watching taekwondo star Moon Dae-sung, who won a gold medal in the 2004 Athens Olympics just like me, working as an IOC member, it made me think more seriously about my dream. But it was difficult to pursue both while I was still a player. After I retired, I knew a lot about players’ concerns by having coaching jobs and going overseas. As I kept thinking about how to help them, I decided to run for the position.

Was it a surprise for you to become Korea’s IOC athlete member candidate after early speculation that you were behind Jin Jong-oh or Jang Mi-ran?

When I first heard that I got selected, I didn’t feel excited like I won the gold medal. My first feeling was concern, thinking “How should I behave in the future?” Jang Mi-ran and Jin Jong-oh have been preparing this for three or four years, and I knew I became the candidate by breaking people’s expectations. For a surprise candidate, people usually have higher expectations. Many people would probably think I have something because I was chosen ahead of Jang Mi-ran and Jin Jong-oh

Did you talk with Jin and Jang after you were nominated?

After the announcement, I called them by phone and told them I will put my best efforts forward. Since they are also my colleagues, they encouraged me. I would do the same for any candidate, even if I didn’t get nominated. I think sports people have a sense of loyalty.

Is it true that you edged out other candidates because of your English?

When I first heard this, it became a pressure point for me because my English isn’t as good as people think. But recently, I have changed my mind. Since many see me as a candidate with good English, I decided to develop my English, and I’m putting more effort into studying English.

Do you think your abundant overseas experience is also a big advantage?

From age 18, I went to countries like Germany, France and Austria and built overseas experience. Although most were non-English speaking countries, many of the other countries’ players spoke English to communicate. Each country has their own accent of English and because of this, I have no problem listening to English in a different accent. Not only the language, but I can also understand their culture. My forte is that I can adjust to anyone or any place.

Do you think your table tennis experience will help you at the IOC?

Table tennis is a sport which has singles, doubles and team events. For singles, you have to battle on your own, but at the same time, there are doubles and team events where you need to work with your teammates. During my career as a player, I learned a lot about responsibility as well as cooperation, social relationship and communication skills.

Did you feel awkward wearing a suit for your interview?

Just a day before the interview, I bought a suit in a nearby mart and shrunk the length of the pants. After I got nominated, I visited the store again and told the clerk, “I successfully finished the interview with a suit that I bought here.” The clerk congratulated me.

What’s left for you now?

First, I have some paperwork and an interview process with the IOC. I have to submit my application to the IOC by Sept. 15, and the IOC will screen my documents and conduct a phone interview before it makes an announcement. Until then, I have to make some revision on my papers. I’m currently working with the KOC and other agencies to prepare this.

What do you think about people’s concern that you only have one Olympic gold medal in your career?

If you look at IOC athlete members, interestingly, some are not even Olympic gold medalists. The number of gold medals is not important. Voting for the IOC athlete member is not a popularity contest where you pick an athlete with the most medals. The important thing is whether you can really work hard for athletes. I will put my best efforts forward based on my experience. I really want to help as much as I can.