Experts get hands-on with culture

Experts get hands-on with culture 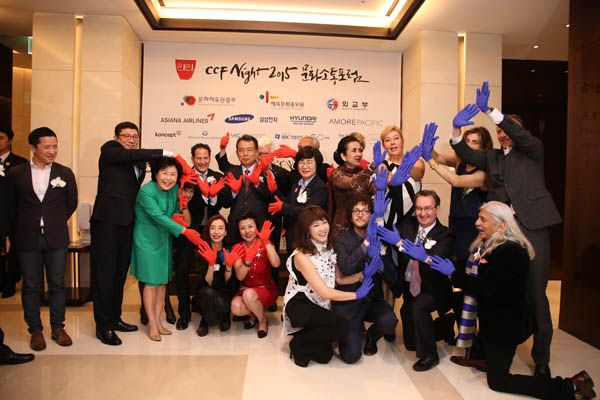 Cultural leaders from 15 different countries, together with CICI President Choi Jung-wha, second from left, and Han Seung-soo, former prime minister, fourth from left in back row, make a heart and a “K” with their hands to show their love for Korea. Provided by CICI


The age of social media has transformed how people consume cultural content. Many have replaced reading weekly fashion magazines with browsing through fashion blogs daily, and watching music concerts on YouTube might be a good replacement for actually attending concerts in person for some.

On the other hand, social media can also trigger an interest in consuming culture offline and thus, has the power to promote a country’s culture.

This was a topic of discussion for cultural leaders from across the globe who visited Korea as part of this year’s 6th Culture Communication Forum organized by the Corea Image Communication Institute (CICI).

“With the growing interest and popularity of social networking services, we live in the smart era where we can share our interests and information freely and globally with no time and place constraints,” said Choi Jung-wha, president of CICI. “During the discussion forum, the leaders will share their opinions on it together with their opinions on Korean culture, which they experience during the event.” 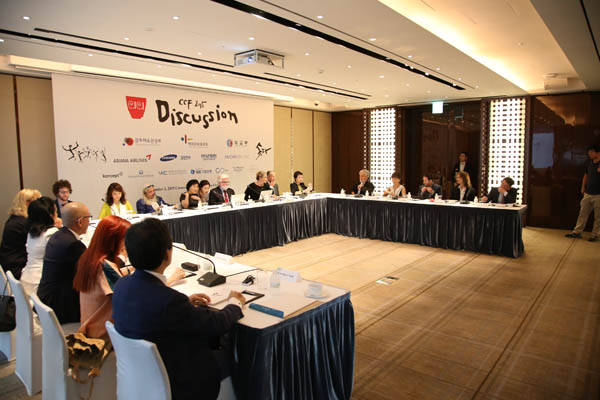 Participants discuss how social media has affected the way people consume culture on Wednesday at the Westin Chosun Hotel in central Seoul.

Every year, CICI invites about 15 to 20 delegates from different countries to experience different aspects of Korean culture for three days. This year, 15 culture experts from 15 countries attended, including Terry Mosher, a political cartoonist from Canada; Wang Jun, president of the Center for China Shanghai International Arts Festival; Susanne Koelbl, a journalist for Der Spiegel from Germany; Nevzat Sayin, an architect from Turkey; Nonaka Tomoyo, chairwoman of the Japanese NGO Gaia Initiative; Arina Sharapova, an anchorwoman for Channel 1 from Russia; Marco della Seta, Italy’s ambassador to Korea; Nora Iniesta, director of the National Museum of Engraving in Argentina; Sanjoy Roy, managing director of Teamwork Arts from India; and Sri Astari Rasjid, a sculptor and painter from Indonesia.

They visited the Bukchon traditional village and Insa-dong in central Seoul, went on a moonlight tour of Changdeok Palace and attended gugak (traditional Korean music) performances. The group even had an opportunity to learn how to play the janggu, a traditional Korean drum with a double head, at the National Gugak Center.

In contrast to these examples of traditional culture, the group also experienced the modern, high-tech side of Seoul with tours of Gangnam, the National Museum of Modern and Contemporary Art and Hyundai Card’s Design Lab and Card Factory.

Above all, the participants dined out at the city’s best traditional Korean restaurants, such as Mugunghwa at the Lotte Hotel, Congdu, Bicena and Woonsan.

Finally, on the third day of the program, they gathered on Wednesday at the Westin Chosun Hotel in central Seoul and held a discussion forum on this year’s topic of “Cultural Combustion in the Smart Age.”

While admitting there are positive aspects to social media, Jean d’Haussonville, general director of the National Estate of Chambord, a cultural delegate representing France, noted that “nothing can replace the direct human living experience of concerts and physical meetings with people.”

Referring to the “unforgettable Korean traditional meals and desserts,” he continued by saying that “you can speak about the delicious tofu tiramisu we had on your Facebook or Twitter, but you can’t eat it on the Internet.”

Alice Sherwood, a senior visiting research fellow at the Policy Institute at King’s, also expressed that experiencing Korean cuisine was “bliss” and that she even wants to open a franchise selling the tofu tiramisu she had tasted.

There are two sides to any coin, and some were optimistic toward social media and its impact on culture.

Rob Moose, a performer, arranger and producer from the United States, shared his experience of how he was able to raise money to produce two albums through Kickstarter, a global crowdfunding platform, while Philippe Magid, executive director of the Bangarra Dance Theater in Australia, also added that it is “encouraging to see people sharing and distributing content through social media of videos and photographs of performances.”

“While you were touring around the city, eating Korean traditional food, watching Korean traditional performances and learning how to play an instrument, some of you were already posting your experiences on your Facebook or Twitter, and your friends have already begun to leave comments and indirectly experience Korean culture,” Namgoong said. “That, I believe is the positive impact, and through you, they also got learn a little bit about Korean culture.”