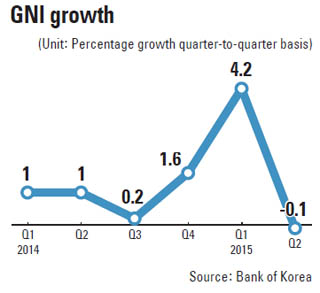 Korea’s gross national income (GNI) fell 0.1 percent in the second quarter compared with the previous quarter, data from the Bank of Korea showed Thursday. This is the first time the GNI has declined since the fourth quarter of 2010.

Net factor income from abroad dipped to 1.3 trillion won ($1 billion) in the second quarter from 5.6 trillion won in the first quarter.

“The fall in the GNI was due to declines in interest and dividend-related incomes from abroad,” said Kim Hwa-yong, a senior Bank of Korea official in charge of economic statistics.

“It is true that the quarterly-based GNI growth rate was the lowest in 18 quarters… but there is also the basis factor to consider,” Kim added. “The previous quarter’s growth rate was unusually high.”

The GNI growth rate in the first quarter of this year was 4.2 percent compared to the previous quarter.

GNI is the total domestic and foreign output claimed by residents of a country, consisting of the nation’s gross domestic product (GDP) plus income made by Koreans living abroad. It does not include income made by foreigners living in Korea.

Data also showed that second-quarter GDP growth was 0.3 percent on a quarterly basis, in line with earlier estimates by the central bank.

The GDP was hit by a 12.2 percent quarter-on-quarter output fall in agriculture and fisheries due to a drought in the early part of the summer.

The manufacturing sector’s production rose by 1.2 percent thanks to increased output of cars and phones, while growth in services was flat.

Within the services sector, declines were seen in retail, hospitality and restaurants due to a decline in foreign tourists visiting Korea, but increased output was seen in the financial, real estate services and leasing businesses.