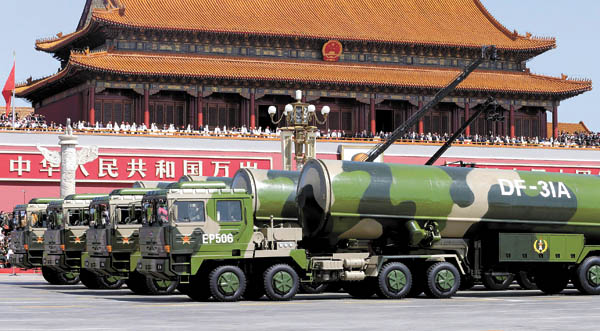 Military vehicles carry DF-31A long-range missiles past Tiananmen Gate during a military parade to commemorate the 70th anniversary of the end of World War II in Beijing Thursday. [AP/NEWSIS]

A massive military parade in the center of Beijing with tanks, swarms of fighter jets and 12,000 goose-stepping soldiers showcased China’s mighty military ambitions.

The world’s second-largest economy’s intention to develop high-tech military weaponry was on display in the same place, Tiananmen Square, where up to 2,600-student protests calling for democracy were crushed to death in 1989. Nearly 200 advanced aircraft flew through unusually clear and blue skies and hundreds of ballistic missiles, unmanned drones, tanks and other military equipment were rolled out past 30 world leaders in grandstands, local spectators and veterans.

Amid the hardware, President Xi Jinping unexpectedly declared he would cut the Chinese military by 300,000 soldiers to demonstrate a desire for peace in the region, an announcement that led security experts in South Korea to scramble to decipher Beijing’s intention. Currently, China’s armed forces are 2.3 million strong.

Kim Sung-kurl, a researcher at the Korea Institute for Defense Analyses, told the Korea JoongAng Daily it was a clear indication of China’s growing emphasis on nurturing “elite military forces with strong intelligence capabilities.” 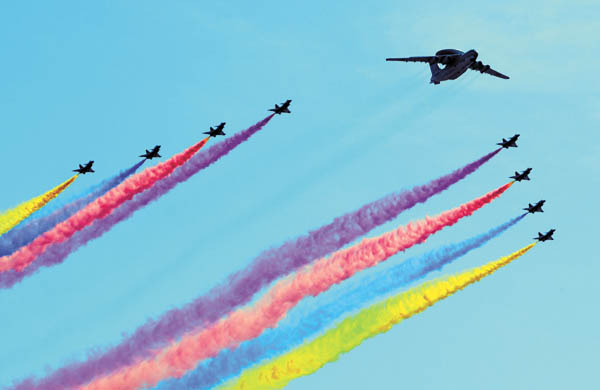 A KJ-2000 airborne early warning and control system leads J-10 fighter jets as they fly by a parade commemorating the 70th anniversary of the end of World War II in front of Tiananmen Gate in Beijing, Thursday. [Joint Press Corps]

“Since the 1990s, China has reduced the size of its military by almost one million in a clear pursuit of bolstering intelligence capabilities,” Kim said. “By downsizing the troops, China aims to modernize its military with money saved from having fewer soldiers.”

Kim, who specializes in missile technology, said Xi’s surprise announcement on the manpower reduction was made to counter growing suspicions abroad, especially in the United States, about Beijing’s drive for military expansionism.

“On the surface, China declared the 300,000-men reduction to display it has no intention to expand its influence through force,” he said. “But in fact, what it is aiming to do is bolster its naval and air capabilities as well as its long-range missile technologies to shift its military agenda to high-tech weaponry from ground forces.”

In a clear display of investment in high-tech equipment, China unveiled the DF-21D and DF-26, anti-ship ballistic missiles nicknamed “aircraft-killers” for their capabilities to strike U.S. aircraft carriers in the Pacific.

The DF-26 is known for its ability to reach the U.S. territory of Guam from the mainland, a clear warning to the U.S. that it should not meddle with China’s maritime disputes with neighboring countries such as Vietnam, the Philippines and Japan. Of all the military equipment rolled past the Forbidden City Thursday morning, 84 percent was made public for the first time.

While it was anticipated that China would unveil the next generation DF-31B and DF-41, it opted not to most likely because of concerns over security leaks possible in a public display. The two ICBM missiles are thought to be able to hit any U.S. city with nuclear warheads.

On China’s increasing investment in its military, a retired major general said one of China’s goals in its militaristic drive is to weaken the trilateral alliance among South Korea, the U.S. and Japan.

“China has been pouring money into modernizing its military, especially its intelligence units, with a clear objective to challenge the Seoul-Tokyo-Washington alliance,” said Han Chul-yong, a former two-star general. “It hopes South Korea will tilt toward China because of the leverage it has on North Korea on top of its strengthened military.”

But analysts pointed to the fact that President Park Geun-hye stood near Xi Jinping while Choe Ryong-hae, a top aide to North Korean leader Kim Jong-un sent to Beijing to observe the extravaganza, was very far from the Chinese leader, to underscore that the diplomatic dynamics in East Asia have truly entered the post-Cold War era.

China is a longtime benefactor to North Korea, providing a lifeline to the impoverished state through economic aid.

China’s founder Mao Zedong sent Chinese troops, including his son, to save the North from United Nations coalition forces during the 1950-53 Korean War (His son died in the war).

The strong ties between Beijing and Pyongyang are called a “blood alliance.”

“The military parade has served as a symbolic event proving East Asian politics have entered a post-Cold War era,” Nam Kwang-kyu, a professor at the Asiatic Research Institute of Korea University, told the JoongAng Ilbo.

“From now on, a new picture will be drawn in which regional players form alliances with other states depending on each different issue [not based on ideological reason],” he said.