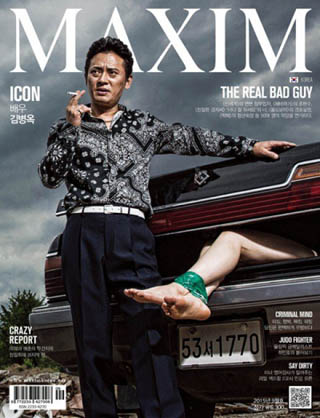 Men’s fashion magazine Maxim has apologized for the controversy over their September cover issue.

The September edition of the men’s fashion magazine found itself at the center of attention after it was publicly unveiled in August. The cover depicted actor Kim Byung-ok posing by the back of a sedan with its trunk open halfway and a woman’s bare legs, bound with tape, sticking out.

The company issued an official apology over the image and announced it would call back and discard all the September publications currently on shelves.

The cover came under fire for its insinuation of sexual assault and murder and received substantial public backlash.

“Even though the cover shot was directed to exude the ambiance of a noir film, there is not a single element that implies [or promotes] sexual assault,” she said.

The company officially changed its position on Friday, however, and announced it would contribute all the money earned from September’s publication to a women’s rights organization.