Screen display an eye to the future, says LG chief

Screen display an eye to the future, says LG chief 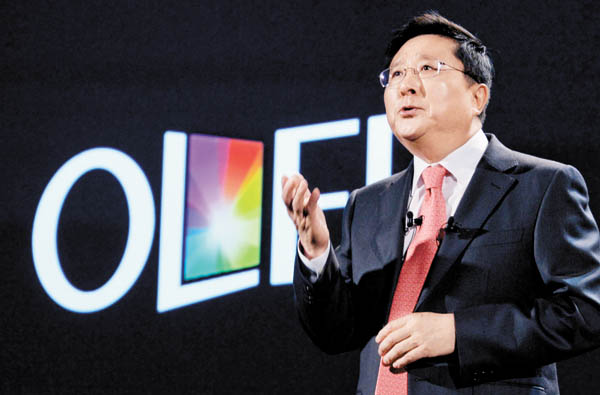 Han Sang-beom, CEO and president of LG Display, delivers a keynote address on the future of display technology Friday at IFA Berlin 2015. Provided by the company

Display technology will change our lives and open up a future we all want to live in, the CEO of LG Display said at the world’s leading trade show for consumer electronics on Friday.

In a rare keynote appearance, Han Sang-beom underscored the growing importance of display in products ranging from smartphones and televisions to smartwatches and high-end medical devices.

Han told the audience on the first day of IFA Berlin 2015 how advanced screen technologies can help take human’s desires and imaginations to the next level.

“Perfect displays must allow us to see the reality that is not physically in front of us,” he said.

“People want to see the world as it is and absorb new information and value from what they see.”

LG Display is considered a pioneer in the display industry with its unrivaled expertise on organic light-emitting diodes (OLED) technology.

He said OLED could fulfill the public’s desire.

“OLED will be the new revolution of light that opens up the future we all want to live in,” he said.

He added that future display technology must have reality and dynamic form. OLEDs can live up to those two requirements, he said, with their precise color accuracy and flexibility.

The IFA also acknowledged the bigger role that the display will play in the future.

“LG Display’s opening keynote at IFA 2015 focuses on a technology that is key to consumer and business users - the display,” said Jens Heithecker, IFA executive director.

“This is a moment to look forward as a global pioneer and technology leader envisions the future. We are thrilled to get IFA started together with Sang-Beom Han.”

Much of Han’s speech was devoted to showcasing the latest lineups of OLED screens.

Among them is an 111-inch tiled OLED panel that combines three pieces of 65-inch OLEDs. The S-shaped mega screen called the “Tiling Display,” unveiled for the first time, has a merit of flexible attribute.

Also introduced was a wallpaper TV that can be attached to the wall using just magnets. The OLED-based panel is less than 1 millimeter thick and can be peeled off and reattached.

The downside, however, is the hefty prices to produce panels based on the technology.

As Han’s expectations might indicate, LG Display is betting big on OLED. LG Display established a separate division devoted to OLEDs in January and plans significant investment in the business.

The company said in May that the company will pull resources to increase production capacity of OLED panels.

The company said a large part of the investment will go toward the large-sized OLED panel segment for premium TV lineups and into the mid-sized area for flexible and wearable products.

Also featured at the keynote speech along with Han was Dr. Ching Tang, the inventor of the OLED technology. Film maker Ridley Scott and Peter Zec, an initiator of the Red Dot Design Award, were also invited to speak about the benefits of the technology, along with Udo Heider, who heads OLED research at Merck.

Although the keynote event explored the future of display, the show is expected to be dedicated to showcasing the latest models of smart watches.