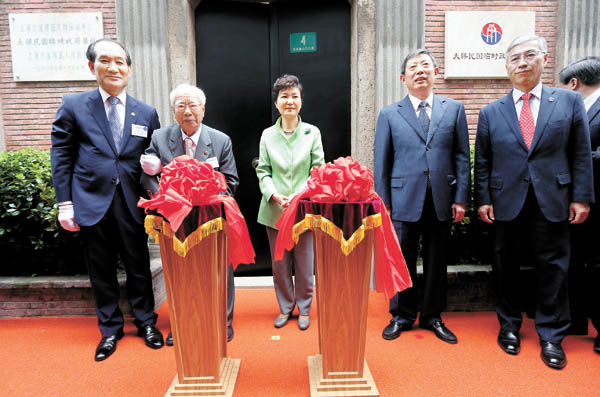 SHANGHAI - President Park Geun-hye said Friday that she will start actual preparation for the unification of the two Koreas, urging China to play a crucial role to bring about meaningful changes from the North.

Park spoke about Korean Peninsula affairs and her determination for the unification during a luncheon with Korean residents in Shanghai on Friday. About 250 people came to the event on the final day of Park’s three-day trip in China.

During the luncheon, Park told the Korean residents about the latest security crisis on the Korean Peninsula, starting with the North’s planting of land mines inside the demilitarized zone, and explained Seoul’s determination to end the repeating cycle of Pyongyang’s provocations.

“From now on, the government will sternly counter the North’s provocations while making efforts to continue dialogue and exchanges,” she said.

She also said the reunions of families separated by the Korean War will resume soon and inter-Korean exchanges and cooperation will be expanded. “I also plan to start actual preparations for unification,” Park said.

Park has said in the past that unification would be a “bonanza” for Korea.

She urged China to play a role.

“As we have seen in the case of German unification, neighbors’ cooperation is crucial for our unification,” Park said. “China, in particular, needs to play an important role to induce desirable changes from the North.”

Throughout her trip to China, Park stressed the importance of Korean unification. During a summit with Chinese President Xi Jinping on Wednesday, Park had an in-depth discussion about unification, the Blue House said. Joo Chul-ki, presidential senior secretary for foreign and security affairs, however, refused to elaborate on the details of the discussion, citing the sensitivity of the matter.

According to the Blue House, Park told Xi that peaceful unification of the Korean Peninsula in the nearest future will contribute to the peace and prosperity of the entire region, and China has supported peaceful unification of the Korean Peninsula by the Korean people in the future. It was conspicuous that Park used the term, “in the nearest future,” as she has not used that term in past remarks.

According to aides, Park is expected to call for a general consensus to make preparations for unification when she returns to Seoul.

Park also issued Friday a muted criticism of Japan, urging Korea’s former colonial ruler to face its militaristic past and join the region’s efforts to move forward to a more peaceful future.

“History flows to the eternity and remains forever, and denying it is like an attempt to cover the sky with a palm and also an overestimation of one’s capability,” Park said in a written interview with the People’s Daily published Friday morning. The mouthpiece of the Communist Party of China is the most circulated paper in China, and Park conducted the interview before the trip.

Instead of condemning the latest moves of Japan to reinterpret its pacifist constitution to rearm itself, Park emphasized diplomatic efforts and the restarting of suspended trilateral cooperation among Korea, China and Japan.

“In order to transform the various conflicts and confrontations currently taking place in Northeast Asia into an order of peace and cooperation, countries in the region must put mutual effort to move forward to a new future based on rightful perceptions of history,” she said. “When this precondition is met, the wounds from the past can heal.”

She said a mutual awareness of history and current affairs is important. “Korea’s initiative of Northeast Asia Peace and Cooperation and the effort to resume the trilateral summit of Korea, China and Japan are also aimed at building a new order of trust through the tradition of cooperation,” she said.

At the summit in Beijing, Park won Xi’s agreement to host a trilateral summit for Korea, China and Japan in the coming months. The annual meeting, which started in 2008, stopped in 2012. The softer tone in her interview appeared to be a part of her campaign to push for the summit.

On Friday morning, Park attended the reopening of the former home of Korea’s provisional government in Shanghai and delivered a speech. Although the memorial was a symbol of Korea’s independence movement in China against Japan’s colonization, Park once again left out any comment about the country’s former colonial ruler.

“The reopening ceremony today shows that Korea and China share the historic significance and value of our independence fight,” Park said. “I hope this newly remodeled building of the government in Shanghai will become a venue of history education to promote the precious patriotism of many martyrs, cherishing the roots of our history and heightening the pride of our people.”

Park said the Korean government will continue to work with China to preserve and manage the sites of Korea’s independence movement in China.

“We will also achieve peaceful unification to complete a true liberation,” Park said.

About 50 guests including Kim Woo-chun, a 93-year-old Korean independence activist, and descendants of Korean leaders who served as the heads of the provisional government attended the ceremony. Mayor of Shanghai Yang Xiong also attended.

Kim was the secretary of Kim Koo, an iconic Korean independence fighter also known by his pen name Baekbeom. According to the Blue House, Kim Woo-chun joined the Korean Liberation Army in 1944 and played a crucial liaison role. He also created the Korean cryptogram during the country’s independence movement against Japan.

According to the Blue House, the Korean Ministry of Patriots and Veterans Affairs and the Independence Hall of Korea created the design for the exhibitions at the provisional government memorial, and China picked up the entire cost of 700 million won ($587,150) to refurbish the building.

The building was also the place where Kim Koo started writing his famous Baekbeom Ilji. It was also this building where Kim formed the Korean Patriotic Corps, a group of independence fighters whose members included Yun Bong-gil, who assassinated Japanese military leaders in Shanghai in 1932. Earlier in that year, Lee Bong-chang, another member, attempted to assassinate Japanese Emperor Hirohito in Tokyo with an explosive, but his mission failed.

A joint survey by the Korean government and the city of Shanghai conducted in 1988 confirmed the former site of the provisional government, and after two years of restoration, the memorial was opened to the public on April 13, 1993. It is visited by about 200,000 Korean tourists a year.

After the initial opening, more restoration took place on the nearby buildings in 2001 to improve the exhibition and viewing conditions. After the first summit between Park and Xi in June 2013, China continued to support Korea’s efforts to restore the former sites of its independence movement. After remodeling that started in June, the building was reopened on Friday.

Later on Friday, Park attended the Korea-China Business Forum as the final event of her three-day trip to China. She returned to Korea later in the day.