Concerts bring tourists back to Korea

Concerts bring tourists back to Korea 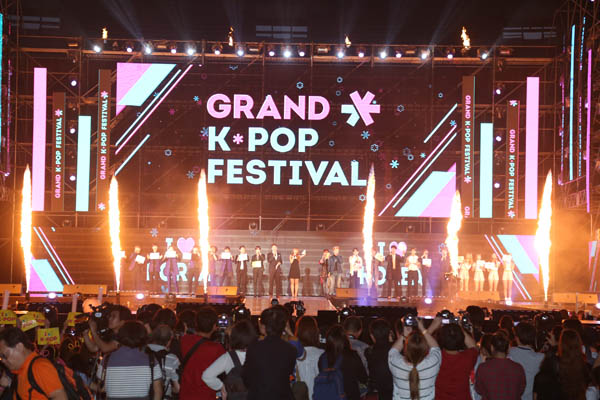 Many K-pop stars, including Beast and EXID, greet fans at the Grand K-POP Festival on Friday at Jamsil Sports Complex in southern Seoul.Provided by the Korea Tourism Organization

Screams cheering for K-pop stars replaced the shouts of baseball fans for at least for one evening at Jamsil Sports Complex during the Grand K-POP Festival hosted by the Korea Tourism Organization (KTO).

“I can’t believe I’m here, seeing the stars right in front of my eyes,” said a girl from Brazil who recently came to Seoul to study for a year. She came with four other friends who were recording all the performances. “This is my first time coming to a K-pop concert, and I hope I get to go to a lot more during my stay in Korea.”

Another couple from France decided to spend the last day of their visit to Korea at the concert in southern Seoul.

“We had some amazing times in Korea and thought this would be a good way to put an end to our trip,” said the couple in their 50s, who heard about the event through the French Tourist Board. “K-pop music is new to us because it is our first time listening to it, but I can feel that it brings out a lot of energy.” 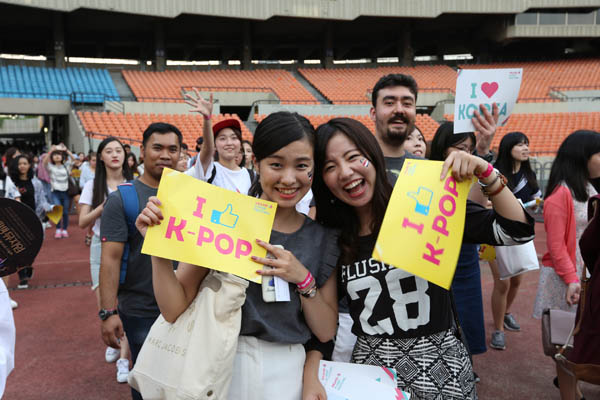 K-pop fans from around the world show their excitement before the start of the Grand K-Pop Festival.

The concert with eight different K-pop groups was organized to give a little momentum to the tourism industry in Korea, which is struggling to recover from the outbreak of Middle East respiratory syndrome (MERS) in June. Prior to the festival, the KTO worked with its overseas branches to invite more foreign travelers to Korea.

“Considering the fact that many K-pop fans are young women who have personal accounts on many social networking services and are very active on them, we thought having them post things they got to do before and after the concert would help spread the word on Korean food and shopping to their families and friends,” the tourism organization said. “The most effective way to promote tourism in Korea is not through a commercial but through communication amongst consumers.”

Some of the most popular K-pop stars, including Girls’ Generation, CN Blue, Beast and EXID, came onstage and not only performed multiple songs but had brief chat sessions with fans. To cater to foreign fans better, the entire concert was translated, and subtitles in Japanese and Chinese were displayed on two large screens. Two MCs, including Hani of girl group EXID, spoke both in English and Korean.

The concert was free and open for online reservation in advance. It attracted around 30,000 people to the sports stadium in southern Seoul. For those who missed the chance to reserve seats, the event was streamed live through YouTube and DaumKakao.

This was the second K-pop concert the country’s state-run tourism organization put together since the Summer K-POP Festival in August at Seoul Plaza in central Seoul. Since the organization thinks that the local tourism market has not yet fully recovered from the MERS outbreak, it will continue hosting similar K-pop concerts elsewhere in Korea to attract more fans from around the world.

The next such concert, 2015 The K Festival, will be held at Incheon Asiad Stadium from Sept. 11 to 14, followed by Gangwon K-POP Concert at the High 1 Ski Resort in Gangwon province on Oct. 3. Seoul will have a One K Concert on Oct. 9 at the Seoul World Cup Stadium in northwestern Seoul.