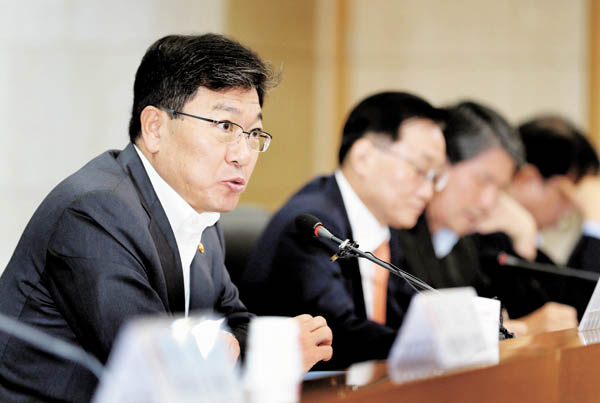 Minister of Trade, Industry and Energy Yoon Sang-jick, left, discusses the reasons and possible solutions to the recent export plunges with heads of the export industry associations for the nation’s five flagship industries - auto, steel, shipbuilding, oil and petrochemical - at a meeting on Monday morning in central Seoul. Provided by the ministry

“Considering the difficult global economy and structural challenges we face, Korea can’t hold back the structural reformations on our economy and industrial environment anymore,” said Minister of Trade, Industry and Energy Yoon Sang-jick at a meeting with exporters’ associations held in Seoul on Monday morning. “The labor reformation should come first through settling the performance and contribution-based salary system.

“In order to achieve the reformation, we need cooperation from labor unions by getting their perspective to be forward-looking and getting them to realize that labor and management are actually in the same boat,” Yoon added, pointing to the shipbuilders’ unions that recently went on strike over salary raises while their employers are in the red. “There is no union if the company doesn’t exist.”

Trade association heads from the steel, automotive, shipbuilding, crude oil and petrochemical industries - the largest victims of the recent 14.7 percent plunge in exports in August year-on-year - attended the meeting.

The five industries are responsible for about 40 percent of Korea’s total exports.

Yoon emphasized that first on the reformation agenda should be boosting productivity at production sites, saying the “unconditional high-salary system without considering performance may hinder the nation’s industrial competitiveness, which has hardly improved in the past few decades.”

He referred to the auto industry as a prime example of urgent reformation being needed, which saw exports in August plummet by 9.1 percent year-on-year due to slowed sales.

According to a joint study by the state-run Korea Institute for Industrial Economics and Trade and the Korea Automobile Manufacturers’ Association last month, the average salary for Korea’s five local automakers was 92.34 million won ($76,600) last year, while the average salary at competitors Toyota and Volkswagen stood at 83.51 million won and 90.62 million won, respectively.

However, the study showed that the per-employee sales of Korean automakers lingered at 747 million won, less than half of Toyota’s 1.6 billion won. Local automakers showed a per-employee production of 37 units a year, compared to Toyota’s 93 units.

Yoon also urged the trade associations to push business rearrangements harder via mergers and acquisitions or via swapping affiliates among fellow industry members, saying the government will try to ease regulations.

Shipbuilding, steel and petrochemical associations requested the government accelerate implementation of the so-called One-Shot Act, which cuts down on the legal procedures necessary in cases of voluntary corporate restructuring or M&As aimed at replacing oversupplied business lines.

The trade associations also asked the government to be more aggressive in their legal support when local exporters sue other countries for implementing unfair antidumping policies to protect their local industries, and to ease carbon emission trading rules.