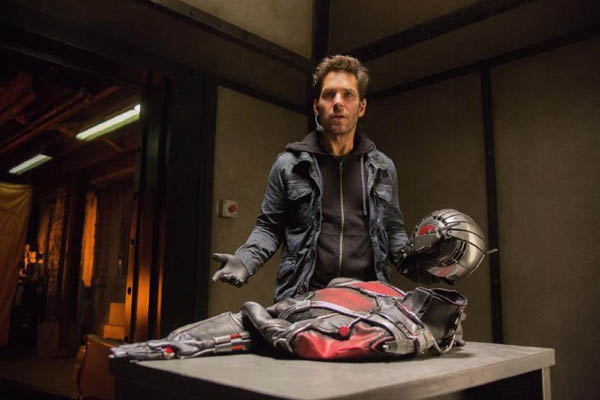 Marvel’s latest superhero movie “Ant-Man” topped the Korean box office in the first weekend of September, according to the Korean Film Council (KOFIC) on Monday.

Attracting 1.1 million moviegoers and playing on 947 screens nationwide, the relatively low-budget superhero film was able to amass 11.1 billion won ($9.2 million) from Korean theaters so far. Its market share was 45.7 percent, according to the KOFIC.

With American actor Paul Rudd in the title role as Ant-Man, who becomes an ant-sized hero to save the world and his loving family, this unorthodox Marvel film is considered to have expanded the studio’s cinematic scope, balancing heroic sentiment with emotion and a comedic plot.

Dethroned by “Ant-Man,” local action-comedy “Veteran,” directed by Ryoo Seung-wan, was spotted in the second place after reigning over the local box office for four consecutive weeks.

Becoming the third film this year to surpass the 10 million tickets mark as well as becoming the eighth most-watched film of all time in Korea, “Veteran” sold 599,464 tickets over the weekend, pulling its five-week total to 11.9 million. That roughly translates to 93.1 billion won.

Domestic thriller “Office” debuted in a satisfying third place, selling 207,264 tickets over the weekend and making 2.1 billion won. Starring a number of well-known actors such as Ko A-sung and Park Sung-woong, the film follows a line of mysterious incidents happening within an office.

Aside from providing suspense and thrills, “Office,” directed by Hong Won-chan, has received positive reviews for pinpointing a series of illicit norms pervasive within Korean companies in contemporary society.

Baek Jong-yeol’s fantasy romance “The Beauty Inside” attracted 152,144 filmgoers in its third weekend. It has now made 14.1 billion won.

“Hitman: Agent 47,” another film from the U.S., debuted in Korea in seventh place, selling 35,905 tickets. The film follows an elite assassin, Agent 47 (Rupert Friend), taking down an evil force that tries to take advantage of his DNA to form a genocide organization. It made 355 million won so far in Korean theaters.