A silent performance of “The Monk from Tang Dynasty” by director Tsai Ming-liang kicked off the opening festival of the Asia Culture Center on Friday at the Grand Performance Hall. By Yim Seung-hye

GWANGJU - Temporary construction fences that surrounded what is going to be the country’s largest culture center were finally removed on Friday.

Although construction of some of the buildings is still underway, delaying the official opening to the end of November, the Asia Culture Center (ACC) in Gwangju, South Jeolla, has opened its doors to the public to begin a three-week opening festival.

Over the weekend, about 30,000 people toured the building that will strive to become the “hub of Asian Culture.” Some local people came to see for themselves whether the center that has eaten up nearly 800 billion won ($663 million) of public money, has the capability to function as the mecca of Asian culture - without nibbling away more tax money. Artists and researchers from across the globe came to find out how they could stretch their imaginations at the ACC.

The unique architecture of the building, designed by Woo Kyu-sung, an architect based in the United States, is attractive enough to catch anybody’s attention.

Entering from the former South Jeolla Provincial Government Building, where construction is set to be completed in November, visitors arrive at the center that has been constructed at a below ground level in a vast area of 161,237 square meters (1,733 square feet). It is composed of five large facilities including the Cultural Exchange Agency, Cultural Promotion Agency, Asian Arts Theater, Agency of Culture for Children and Asian Culture Information Agency.

The design of the Grand Performance Hall inside the Asian Arts Theater is an impressive design that adopts the producing theater.

The Grand Performance Hall, which can seat about 1,200 people, looks like a large factory house at first glance. But one wall of the hall is a sliding door that opens up to an outdoor amphitheater. The hall can also be divided into three smaller areas as walls can be lowered from the ceiling. 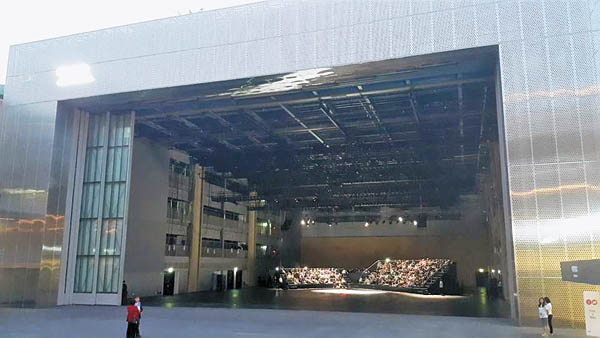 Asia Culture Center’s Grand Performance Hall, which is designed by architect Woo Kyu-sung, claims the design of a producing theater is to function as an “art factory.” It is uniquely designed so that the wall on one side of the hall opens to the outdoor amphitheater. Provided by ACC

According to Kim, the producing theater is in line with the ACC’s mission of “becoming the platform of contemporary arts in Asia and the window where Asian contemporary culture gets transmitted across the world.”

“I’ve had so many artists from all over the world telling me after seeing the Grand Performance Hall that they want to come and perform here,” said Kim. “It’s like the playground of their dreams coming true.

“They told me they are getting inspired by the hall and want to experiment with new things. I believe this will become the artists’ favorite playground where they can come and give full play to their imagination.”

But perhaps the artists are the only ones playing on this “playground.”

For the opening performance, which will “signpost where the Asian Arts Theater will aim towards,” Tsai Ming-liang’s “The Monk from Tang Dynasty” has been selected. On Friday evening, the audience was wowed when the sliding doors opened at the Grand Performance Hall. The director only used the center of the hall and laid down an eight meter by 4.6 meter (8.7 yard by five yard) rectangular piece of white paper as his stage.

Actor Lee Kang-sheng, who plays the monk from the Tang Dynasty was lying down on this white sheet of paper as the audience entered the hall. A moment later, a painter holding charcoal came in and began drawing spiders around a sleeping monk.

Very slowly, the painter drew the spiders as the audience watched to see what would happen next. After drawing about 11 spiders for about an hour in silence by the sleeping monk, the painter began to color the white sheet of paper with the black charcoal making the audience wonder whether he would be painting the whole sheet. He did, for about 20 minutes.

The monk finally got up after about 90 minutes into the performance. By this time, some of the audience seemed to be having a hard time sitting on the uncomfortable seats, while others gave up watching the performance and fell asleep.

The monk seemed to be signaling the end of the performance but the charcoal-covered paper rolled up with an appearance of a clean sheet underneath. An air of anxiety filled the hall as the audience wondered whether another round of charcoal painting was about to begin. The monk sat down and began eating a peach while three painters showed up again to draw black lines on the new sheet of paper. The performance went on similarly without a sound for just over two hours while the audience struggled to stay attentive and awake. 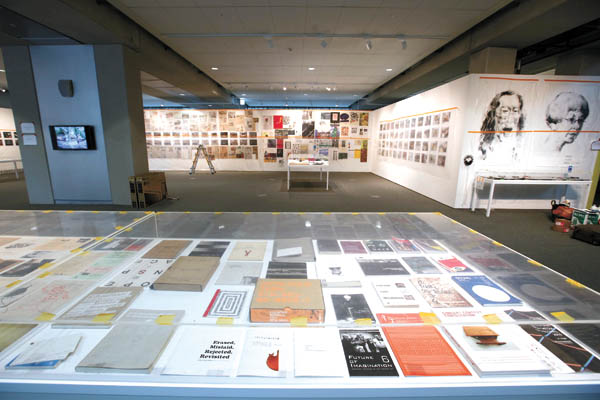 A scene of the Asian Culture Information Agency’s open library which will house about 10,000 materials on diverse subjects. Provided by ACC

The “director wanted the audience to endure suffering together throughout the performance,” said Kim.

Some foreign artists and directors praised the performance saying it was a good choice to show the “direction of where the ACC will go.” Many of the audience found it less entertaining.

“I was watching the performance from outside as the sliding door was open,” said Song Min-kyung, 32, a Gwangju local who came with her 6-year-old daughter.

“I only watched a part of the show for about an hour outside ... but the performance looked so difficult and boring that I even felt sorry for the people inside.”

She said that if all the performances are contemporary and experimental, it is less likely that the general public will go to see any of them.

Other than “The Monk from Tang Dynasty,” which was performed three times until Sunday, there are 32 other contemporary performances to be staged until Sept. 21.

Other facilities, however, are attracting the public with their unique programs and content.

At the Asian Culture Information Agency, there are thousands of archives where visitors can delve into a wide range of topics collected by the center. Divided in different themes such as music and architecture, the information agency provides materials for the arts and the cultural industry.

For the opening festival, one section of the library was dedicated to the “Singapore Art Archives Project” by Koh Nguang How. On display is a collection of photographs, books, posters, brochures, invitation cards and newspaper articles related to art collected by Koh, an artist-archivist.

“One of the reasons I exhibit archives is to point out that archives can contain mistakes and problems,” said Koh. “Depending on how accurate the materials are, people can learn from the wrong material. I also show how art is being written in Singapore as media in Singapore is not as free all the time as other countries. So depending on when the article is published, it is affected by different kinds of press freedom.”

Koh said establishment of such a large archive facility in Gwangju is significant because it is the only one in Asia.

Referring to criticisms and concerns over the establishment of the ACC, Anselm Franke, the curator of an exhibition “Interrupted Survey: Fractured Modern Mythologies” said that “no institution of this size can function from the first day according to all people’s expectations.”

“If there’s a clear commitment here that this space is for artists, not only from Korea ... in a few years time, ACC could become one of the most important places as a lot of people are in need of such a place,” said Franke who is based in Berlin. “But it all depends on commitment to the artists.

“Obviously there are places that suffer from being too institutionalized but I think it is totally normal that in our preparations we always have back and forth and ups and downs because new institutions have to go through these processes as you can’t do this on the first day.”

Bang Sun-gyu, who is acting director general of ACC until the official opening in November said that “contemporary art has the potential to go global.”

“Art needs time,” said Bang. “If the public waits for us for five to 10 years, it will work in collaboration with Asian artists and produce great works that can be exported overseas.”