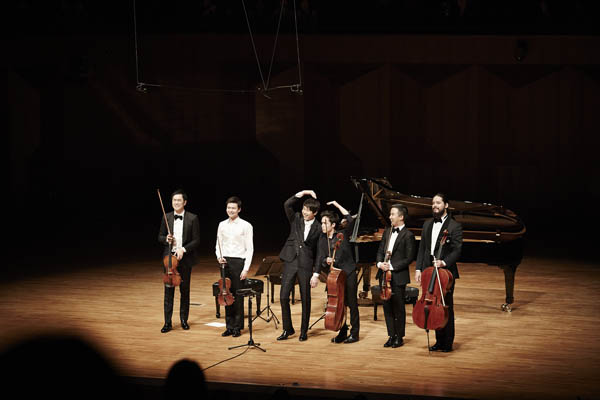 Oct. 1, 7 and 9: The ensemble Ditto, composed of violist Richard Yongjae O’Neill, violinist Stefan Jackiw, violinist Daniel Chong, cellist Michael Nicolas, pianist Lim Dong-Hyek and pianist Steven Lim, debuted in 2007 with a mission to foster a greater appreciation for classical music. They will bring this zeal to a three-day concert festival that will include the group’s performances and collaborations with other musicians. The first show is called, “The Best of Ditto: Ditto Hits.” The second concert, “Chamber Music Night,” invites to the stage Gidon Kremer, a Latvian violinist who has received numerous accolades, including the Grammy Award in 2002 and a nomination in 2015. The last performance, “All Concert,” showcases a full-scale concert with Lim Dong-Hyek, Gidon Kremer and the Kremerata Baltica, a chamber orchestra founded by Kremer in 1997.

Saturday: Soprano Jo Su-mi will hold a solo concert, “Memory of Nostalgic Days.” The concert will feature songs from Jo’s first pop album, “Gu.Ri.Da,” including classics like “Bygone Love,” “In the Flower Garden” and “Love, About Its Lonesomeness.” Jo is famous not only for her skills as an opera singer but also for performing the theme songs of famous Korean series like “If I Go.” Guest performers include singer So Hyang, harmonicist Jeon Jae-Deok and tenor Yoon Young-Seok.

Sept. 12 and 13: B1A4, which has fascinated fans and audiences with a variety of different concepts at each concert, will hold a concert to show off the group’s new style. At an outdoor theater at Yonsei University, B1A4 will captivate the audience for hours with an interactive performance. The large stage and variety of settings will complement the band’s music for an unforgettable night.

Sept. 22: Bon Jovi is coming back to Korea after 20 years. With hit songs such as “Livin’ on a Prayer,” “Bad Medicine” and “It’s My Life,” Bon Jovi has amassed 130 million album sales and nearly 38 million concert attendees worldwide.

Oct. 9 to 11: Ballad and R&B musician Kim Dong-ryul, well-known for his ticket power, will hold a large-scale concert this October. The concert will accommodate 30,000 attendees for three consecutive days. Musicians Lee Juck and John Park, who are close friends of Kim’s, will perform as guests to diversify the concert. As Kim has not appeared on TV for nearly four years, the concert is highly anticipated by many of his fans.