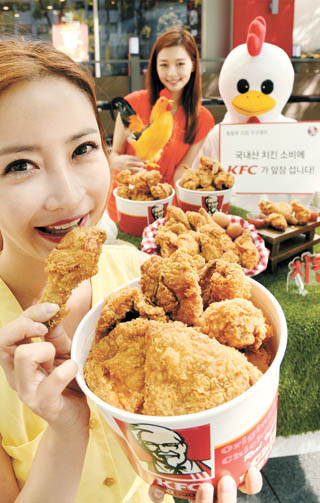 A model holds a piece of KFC’s signature fried chicken. The chain is holding a promotional event until Thursday where it will offer nine-piece crispy chicken buckets with two packets of chili sauce for 13,500 won ($11.25), under the name “gugu chicken bucket.” The price is 37 percent cheaper than if the pieces were bought individually. The event is to celebrate “chicken day” or “gugu day,” which is Sept. 9. Gugu in Korean can be translated as the sound that chickens make, as well as “nine nine.” [NEWSIS]