Actress takes on the role of office worker

Actress takes on the role of office worker 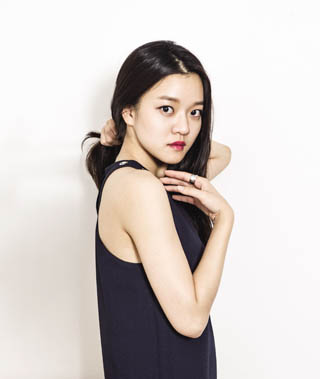 These are the words that come to mind when thinking of actress Ko A-sung.

And those were exactly what she was when the JoongAng Ilbo, an affiliate of the Korea JoongAng Daily, interviewed her about her newest film, “Office,” which opened in theaters last week.

When the photographer asked her which side of her face she preferred, she confidently replied that she “doesn’t care.”

Even after enduring eight straight hours of interviews with other media, the 23-year-old said she would keep going since it was her last interview. There was no sign of fatigue.

“Office,” directed by Hong Won-chan, is a thriller that takes place within an office. Highlighting a number of unsavory practices pervasive in Korean companies, the film has been applauded for not only its suspenseful plot but also its sharp depiction of what it is like to live as an office worker in Korea.

Ko took on the role of Mi-rye, an intern vying for a regular position at a company. Although she is good-natured and hardworking, her post continues to be threatened when new interns with better resumes arrive. Playing a multidimensional character with a critical role in solving the mysterious case near the end, it was mandatory for Ko to posses strong acting skills.

“I wanted to challenge myself with this role,” Ko said. “It was a character that I had never come across before, and as soon as I read the script, I was intensely immersed in it.”

Q. Can you describe Mi-rye a little more?

A. Mi-rye has a strong sense of identity, but her self-esteem is very low. She wants to be confident and strong on the outside, but inside, she is very fragile. I was attracted to that contradiction, and I felt like no stranger to the emotions she felt.

What do you mean by you were “no stranger”?

I felt like I have known her for a long time. You know, those kinds of friends who want to be perfect on the outside, but inside, they are really vain. I just felt really sorry for that kind of situation.

How did you feel having to spend a lot of time inside an office while filming?

Usually, I get inspiration from various sources before I go into a shoot. For example, if my character is a student, I go through my yearbook to remind myself of the emotions from those days. For this film, I actually visited offices where my friends were working. I noticed that there was nothing to throw away inside an office. Everything seemed like it was there for a purpose, and everything inside the office was structured with straight lines. Thinking that so many emotions could pass between those sharp and straight lines, I felt sympathy for people working at companies.

Are you always attentive to your surroundings like this?

Because I believe that an actor should always be learning. Maybe it is a bad habit and can offend some, but observing other people has become my regular activity.

Can you compare yourself with your character Mi-rye?

First of all, I don’t have that fanatic side that Mi-rye has. The similarity would be that I also lack self-esteem, which is probably the reason why I feel empathy for her. When I was shooting “Office,” there was a day when I was totally worn out after finishing my day. On my way home, I thought to myself whether I have any weapon other than just “trying hard.” And come to think of it, I don’t have that much.

Are you always this hard on yourself?

Well, I am not sure about that yet.

Do you tend to get influenced by the characters you play in films?

It depends on which film I participate in. For example, when I was filming for “Elegant Lies” (2014) I couldn’t get over my on-screen situation in which I lost my younger sister due to school bullying. I was depressed for quite a long time, feeling that this would be what it would be like to lose my dear ones.

What do you think is the core of acting?

Aiming for the genuine - that is what I think should stay unchanged even in this highly fast-paced society. I am in the last generation of film cinema and also the first generation of digital cinema. So there was some confusion from having acted in both. Going through that phase, I came to think more strongly that authenticity should be kept at the center of my acting.