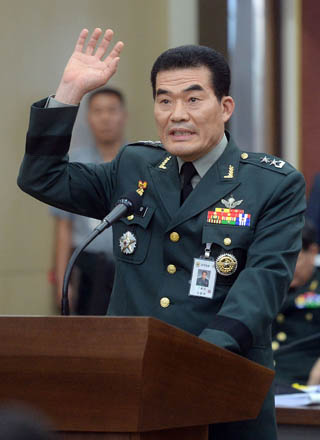 Major General Koo Hong-mo, chief of operations for the Joint Chiefs of Staff, briefs lawmakers on the National Defense Committee on Friday about the grenade explosion. [NEWSIS]

One soldier died and two were injured in a grenade explosion on Friday at a boot camp in Daegu.

According to the Army’s 50th Division, a K413 hand grenade suddenly exploded in the hand of a trainee as he attempted to throw it during a training session on Friday.

The accident fatally injured the instructor, a 27-year-old sergeant first class named Kim. He was taken to the hospital but died later on Friday.

The 20-year-old trainee lost his right hand and underwent surgery at a nearby hospital. Another 27-year-old sergeant first class surnamed Park, who was monitoring the situation from 2 meters (6.6 feet) behind, was also injured by blast fragments. The two injured soldiers are in stable condition.

“During training on Friday, the trainees were taught to throw grenades on the instructor’s order,” an Army official said. “But the grenade exploded just after the trainee pulled out the safety pin, before he threw it.”

There are two safety apparatuses on grenades. After removing the safety pin, the person throwing it is required to hold the safety clip until he or she throws the grenade. It usually takes two to four seconds to explode after the clip is removed.

“We believe the trainee did not properly hold the clip,” said an official in the Army’s 50th Division. “But we are not ruling out the possibility that the grenade was defective.”

At the time of the accident, 205 trainees were waiting behind the dugout, though none of them were hurt. The trainees are in the third week of their military training.

The military authority immediately suspended the training session and is questioning those at the scene.

In September 2014, a similar incident occurred at the Marine Corps’ training camp in Pohang, North Gyeongsang, which killed a 19-year-old trainee and injured two instructors.