Every day, Woo-jin wakes up in a completely different body. He transforms into an unattractive man, an old man, a charming man, a woman, a foreigner and so on. Above are some of the actors who play Woo-jin. Provided by the distributor 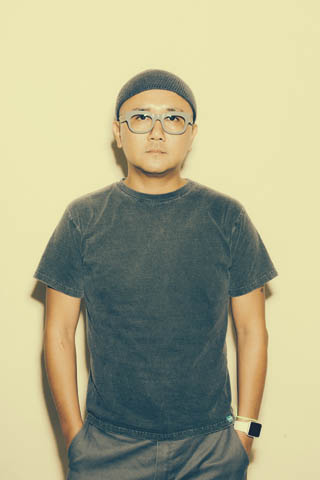 Director Baek Jong-Yeol, 45, is multitalented: He is recognized as a star director of TV commercials, including famous ones for the Canon E0570D and Hyundai Card M. He also created a typeface and named it after himself. And this year he debuted as a film director, producing a hit fantasy romance flick, “The Beauty Inside,” which has amassed more than 1.87 million ticket admissions as of Friday.

The film centers on the love life of a young man who, every time he goes to sleep, wakes up inside a new body. Explaining that he was inspired by a web drama series by Toshiba and Intel of the same name, Baek said he was curious to know “what would happen if you were in love with someone whose appearance changes every day?”

Though prominent in the advertising industry, Baek said he often found himself working closely with film. He created the trailers for “Rules of Dating” (2005, directed by Han Jae-Rim) and “Over the Border” (2006, directed by Ahn Pan-seok), and the opening credits for “Oldboy” (2003, directed by Park Chan-wook), “Voice of a Murderer,” (2007, directed by Park Jin-pyo) and “Snowpiercer” (2013, directed by Bong Joon-ho).

Baek has long had an affinity for film, but he never before considered trying his hand at film directing, he said, adding that it was through “The Beauty Inside” that he finally challenged himself by taking on that role. After he was intrigued by the original work, Baek said that Yong Film CEO Lim Syd, who is his good friend, suggested that he direct a feature.

Talking about his film, Baek said, “It felt like I was moving from a one-room apartment to one as big as 100 pyong [3,600 square feet].” To learn more about Baek and his debut film, the JoongAng Ilbo recently sat down with the director for an interview. Here are some excerpts.

What is the biggest difference between film and advertising?

A. In advertising, there’s a burning thrill in making everything on a tight schedule. You need to be able to understand and tell how a lifestyle can change and grab the audience’s attention. In film, it’s more about taking things slowly and prudently. Thinking of the big picture - trying to keep a balance of several components including composition, filming and music - was a whole new experience for me. When I finished the film, I felt a sense of pride that was equivalent to climbing to the top of a huge mountain.

What aspect of the movie did you want to emphasize the most when you worked on the film script?

What I wanted to achieve through this movie was to have the viewers experience it realistically. Though the film is considered fantasy, I hoped that the viewers could empathize with the universal relationship problems depicted in the blossoming-then-fading romance between Woo-Jin and Yi-soo (played by Han Hyo-joo). For example, when in a relationship, do we not assume that the other person would undoubtedly like the choices we make? The challenges that Woo-jin and Yi-soo face in their relationship are no different from those that ordinary people deal with in theirs.

The movie seems to focus solely on Woo-jin and Yi-soo’s romance, contrary to other melodramas that keep the audience interested with the supporting characters’ stories.

We decided to eliminate subplots from the start. Typical melodramas use them to attract the viewers’ attention in moments when they might look at their watch or start wondering what to eat after the movie. It seemed a bit too much. Instead, we tactfully showed the main dishes without the sides.

That must have been a difficult choice to make. So did you trust the original concept and push ahead?

Yes. The way that different actors play the same role - that feature itself is our way to keep the viewers engaged. As a total of 123 Woo-Jin’s appear in the film, those frequent changes serve to dictate Yi-Soo’s emotions and their magnitude as she tries to accept Woo-Jin’s condition. For example, when Woo-Jin appears as Chun Woo-Hee and Juri Ueno [both women], it proves to be the most difficult time for Yi-Soo to love him. By accentuating the obstacles to their love, it becomes ever more ardent.

It seems that attractive stars such as Park Seo-joon and Lee Jin-wook are on screen during the critical moments in the romance. In that regard, viewers have criticized the film’s credibility.

That was to convey Woo-jin’s desire to make himself better for Yi-soo in any way possible. To make her happy on a special occasion, he takes advantage of the situation. When he confesses his love to Yi-Soo and when he introduces himself to Yi-soo’s colleagues, Woo-jin waits until he is in the body of a handsome man. In truth, Woo-jin is described merely as “good-looking” in the script, but we ultimately cast such handsome actors as a huge service to the viewers.

The film’s sophisticated visuals immediately draw viewers’ eyes, as the move is full of exotic and luxurious settings. The artistry is not only pleasing to the eye but also plays an important role in the story’s flow. Woo-jin’s furniture design studio and Mama Studio, where Yi-soo works as a furniture saleswoman, are both beautifully designed.

In the original work, the protagonist restores secondhand furniture for a living. This focus on furniture, which is not as common in films, seemed appealing, and we altered the occupations to something more well known. Also, Woo-jin’s studio and Mama Studio differ from standard Korean furniture shops. We included some foreign interior materials that were originally used in my previous advertising work. In the case of Mama Studio, we tried to adopt the look of New York’s Chelsea Market.

Lim of Yong Film recommended it. It’s by the British band, Citizens! As soon as we listened to it, we were set on it as the ending song. In this movie, we wanted to present British modern rock and highlight its distinctive qualities to the audience more accustomed to K-pop and American pop. Among these, the song, “Amapolia,” which Woo-jin and Yi-soo listen to on their first date at a music store, was the music director Jo Yeong-wook’s pick. This song effectively portrays the closeness Woo-jin and Yi-soo feel from the shared experience.

The film itself seems to suggest that a sophisticated film should elicit meditations on inner truth rather than focusing on outer appearances, does it not?

You can say that (laughs). It may be that, since I was previously concerned with outer appearances in my advertising work, this concept of inner truth and beauty compelled me. The message that I wanted to tell most fervently through the film was how to treat your loved ones … If those who see the movie can afterward reflect on their behavior and treatment toward their loved ones, if they feel a bit of regret, I would like to think that I’ve accomplished my goal.