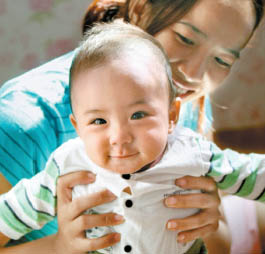 This 4-month-old boy was born to undocumented immigrants from Cambodia. His parents named him Hanguk in the hopes that he will be able to grow up in Korea. Desperate for their child to get Korean citizenship, they believe their only option is to give him up for adoption. By Gong Jeong-sik

Undocumented immigrants in Korea would do anything to give their children normal lives and Korean citizenship - even if it means resorting to brokers to illegally obtain false documentation, or giving their children away.

A Cambodian couple, 30-year-old Lee Hong and his wife, 28-year-old Nali, had a baby four months ago in Korea. They named him Hanguk, which means Korea.

However, they could not register the birth of the child with the Cambodian Embassy in Seoul because they are undocumented immigrants in this country. Thus, their child remains stateless, with no nationality.

The parents sought out Kim Seong-jin, head of the Pohang Migrant Center, when their child was just 100 days old. There, they begged Kim to adopt their son so that he could get Korean citizenship and grow up without hiding and receive an education. They reasoned that since they don’t live far from Kim, they could also see their child often.

However, Kim replied, “The baby has parents, so it’s not right for him to be adopted. I cannot accept the child.”

But the mother insisted, “Won’t there be some as good as you? We beg for the child to be put up for adoption. We just hope the adoptive parents will not live too far away so that we can see the child even just once a month.”

The child has not yet been adopted.

With more than 200,000 undocumented immigrants, the National Human Rights Commission of Korea believes there are about 20,000 stateless children in Korea.

However, these parents are sometimes forced to make extreme decisions, such as putting their children up for adoption or even abandoning their babies, if such actions mean their children would get Korean citizenship.

In 2009, a 1-year-old girl was found in a basket in front of a childcare center in Gyeonggi along with a letter. It said, in wobbly handwriting, “I will earn a lot of money and come back. I will definitely return.” But the letter did not include the name of the parent or any contact information.

The childcare center could not raise the baby, so the 55-year-old director named the girl Yu-jeong and sent her to an orphanage.

Two years later, a 26-year-old Vietnamese woman came looking for the girl at the orphanage. She brought a pink dress and doll to give to her daughter.

She hugged the timid girl tightly and wept, repeating over and over again one word in Korean: “Sorry.”

Even now, the woman visits Yu-jeong frequently. However, she won’t take her daughter back. She is afraid that if she is confirmed to be Yu-jeong’s birth mother, her daughter may have her Korean citizenship taken away and be deported to Vietnam.

Thus, the woman simply watches from afar as her daughter grows up.

“During times when there were many illegal Korean immigrants in developed countries, our government requested those countries protect our people,” said Ahn Eun-joo, head of the international cooperation division at the Migrant Workers Hope Center. “Now, our country has become a relatively advanced country, so on a humanitarian level, we need measures to prevent such separations [of parents and children].”

On June 28 at Incheon International Airport, a 37-year-old Thai woman, Lia, hugged her 2-month-old daughter while weeping, “Mama is sorry for failing you.”

Soon after, she handed the infant over to a woman, who would take the baby to Thailand to be raised by her maternal grandmother.

Lia and her husband have lived in Gyeonggi as undocumented immigrants for the past three years.

After having a baby, they decided it would be better for their daughter to be raised in Thailand rather than be stateless in Korea. Without eligibility for National Health Insurance, the medical and childcare costs would be too high for the family to bear.

“My daughter doesn’t have the double eyelids that all Thai people have,” Lia pointed out. “If she remained in Korea, she would have looked like a Korean.”

It is not uncommon for undocumented immigrants to send their children back to their home countries. The biggest factor is that the children lack health insurance, so if they get sick, they will not be able to receive proper treatment due to high medical fees. As a result, grandparents often raise the children while the parents in Korea earn money to send back home.

However, some parents take drastic measures to keep their children close, including falsifying identities.

The Embassy of Thailand is known to be tolerant toward undocumented immigrants in Korea and generally issues passports to children born here, but other countries are not so lenient.

As a result, some parents resort to using brokers to illegally fabricate birth documents in order to obtain a passport. Some even find immigrants with legal status to apply for a stateless child’s citizenship in their stead. The process is usually quite costly.

One 32-year-old Vietnamese man, Wen Banhwa, and his wife sent their 9-month-old daughter to Vietnam in December 2012 through a broker. There, they fabricated documents to make it appear as if she was the child of their friend, who was an immigrant with legal status.

Of the remaining cost, 1.5 million won went to the airfare and 500,000 won to the person who transported the baby back and forth as payment.

There are quite a few brokers who specialize in procuring false identities for the children of undocumented immigrants. According to the Gyeonggi Provincial Police Agency, some 60 people were busted for such activities just last year.

On the other hand, Tobaro, a 28-year-old Mongolian woman, sought another option because she could not afford a broker. She had a baby girl in May 2014, shortly after her husband was deported from Korea. After 100 days, she ran out of money because she was unable to work, so she decided to send the baby to be raised by her maternal grandmother.

While she knew about the brokers, she didn’t have the money. “Gathering courage, I sought the Mongolian Embassy in Korea. I said, ‘I know I did an illegal act in Korea, but it’s not like I did something illegal in Mongolia. Please work with me, a fellow Mongolian,’” Tobaro said. “I was fined 160,000 won for registering the birth late but received the passport.”

She then found someone to take her baby to Mongolia for a 400,000 won fee.

“I was able to feed her breast milk in Korea,” she said, wiping away tears. “In Mongolia, my baby had to eat formula, and at first, she didn’t eat it and cried a lot.”

Yim Dong-suk, 42, is an immigrant from Thailand with legal status in Korea who served as an escort for the baby of undocumented immigrants just once. She said that a stranger, an undocumented Thai immigrant, found her phone number and asked her to take her baby to Thailand. Though they had never met, Yim agreed and received 200,000 won.

Yim still gets calls requesting the service. However, she now refuses. “I saw how the parents were separated from the baby and the baby in my embrace did not know what was going on,” she said. “When I recalled that, I could never do it again. A child needs to be with its parents.”